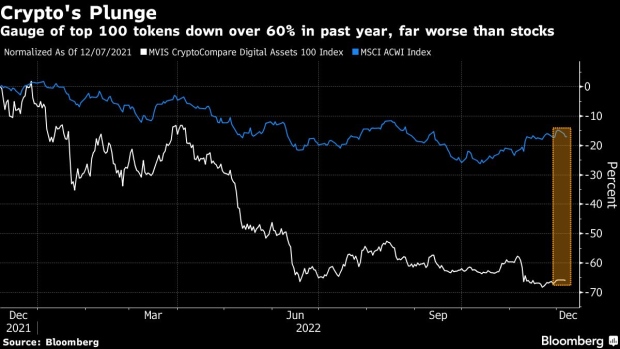 (Bloomberg) -- Nomura Holdings Inc. plans to break a profit at its crypto unit within two years as the spectacular failure of Sam Bankman-Fried’s FTX exchange spurs demand for safer counterparties in the digital-asset sector.

The unit, Laser Digital, will leverage the backing of the Tokyo-based investment bank to win over institutional investors and plans to add 50 employees by March, its Chief Executive Officer Jez Mohideen said. It’s now easier to hire talent and acquire assets at a lower valuation, he said, adding that the firm has tightened risk management.

“The latest events in the crypto market will provide an opportunity for us as it will drive institutional investors to digital-asset firms backed by traditional finance houses,” Mohideen said in an interview. “We’ve run all the stress tests and assuming worse-case scenarios in terms of market volume, price volatility, we believe we can turn profitable within two years.”

Nomura’s launch of its digital-assets arm in September, one of the boldest embraces of the sector yet by a global financial firm, came amid a deep rout in crypto markets that was exacerbated by the bankruptcy of FTX last month.

Other lenders are also seeking to make a mark on the industry. Singapore’s DBS Group Holdings Ltd. is already offering digital currency trading for wealthier clients, while Goldman Sachs Group Inc. plans to invest tens of millions of dollars in crypto firms, according to a report. JPMorgan Chase & Co. is exploring the use of blockchains for transactions like collateral settlements.

“We can’t look at this asset class based on the market price,” 49-year-old Mohideen said. “You need to believe in it, invest in it and take a five-to-10 year view.”

Nomura has made a “significant” multi-year capital commitment into Laser Digital, Mohideen said. Japan’s biggest brokerage named former head of trading and investment banking Steve Ashley as chairman of the digital-assets venture. Mohideen was previously chief digital officer of Nomura’s wholesale division, as well as co-head of global markets in Europe, the Middle East and Africa.

“Nomura is taking the digital-assets business very seriously,” said Mohideen, who previously worked at hedge fund Brevan Howard Asset Management and has a PhD in Process Systems Engineering from Imperial College, London, according to his LinkedIn profile.

“The intention and the vision of this entity is to be a significant revenue driver for Nomura group,” he said.

Laser will house three business verticals: trading, asset management and a venture capital fund. Trading will be the unit’s “core engine” to create revenues, while Laser Digital Ventures will invest in early stage startups and entrepreneurs that are developing institutional products and services in crypto. The fund aims to invest in 15 to 20 seed to Series A deals per year globally.

The foray adds to Nomura’s interest in Komainu, a digital-asset custody venture which it started in 2018 along with CoinShares and crypto security company Ledger.

Following the risks of interconnectedness and over-leveraging that pulled down several crypto firms in the last year or so, Laser has added “extra filters” on its risk management to assess counterparty exposure, he said.

Crypto outfits including Three Arrows Capital, Celsius, BlockFi Inc. and Voyager ended up bankrupt and several others are facing a credit squeeze. A 65% plunge in the crypto market in the past year exposed leveraged bets and triggered margin calls.

Laser is seeking a license for its trading and asset management business in Switzerland, where the firm is based, as well as in Dubai due to its clear and stable regulations, Mohideen said. At a later stage, the firm plans to operate in the US and Japan, he added.

--With assistance from Sanjit Das.