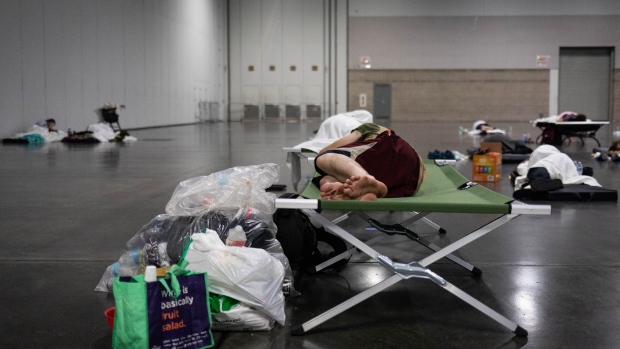 Residents at a cooling center during a heatwave in Portland, Oregon, U.S., on Monday, June 28, 2021. Portland posted its hottest day in history on Saturday, and Sunday will be even warmer as a heat wave continues to bring oppressive temperatures across the normally mild Pacific Northwest. , Bloomberg

(Bloomberg) -- Record heat spurred rolling power outages in the Pacific Northwest even as the hottest temperatures were set to recede Tuesday in Portland and Seattle. The Northeast also will kick off a heat wave that should keep boiling New York through midweek.

The excessive heat spurred Avista Corp., with nearly 340,000 customers in four northwestern states, to institute rolling outages to about 30,000 customers Monday and plan more Tuesday afternoon and evening that it expects to last about an hour each. Hot weather also closed or delayed rail services, buckled highways, and fueled elevated risk of wildfires.

The mercury hit 116 degrees Fahrenheit (47 Celsius) in Portland Monday, a third-straight record, while Seattle notched another all-time high at 108, the National Weather Service said. Lytton, British Columbia reached 118, a new record for Canada just one day after shattering a prior high since 1937.

“I have never seen anything like this in my 40 years of forecasting,” said Paul Walker, a meteorologist with AccuWeather Inc. in State College, Pennsylvania. “Records are falling not just in the United States but in Canada.”

The rolling blackouts may not be the last as officials across Western states brace for a brutal summer that started early and promises to bring more heat, fire, drought and power strain. In California, where the grid operator may request conservation to avoid outages, dried vegetation helped the Lava Fire near Mount Shasta explode in size overnight -- another sign of multi-pronged threats confronting the most populous state and others in the West.

Meanwhile, another heat wave building from Pennsylvania to Maine could push New York into the upper 90s, the weather service said. Humidity will make temperatures feel even hotter, driving energy demand across the region that relies on air conditioners to beat summer heat.

Boston tied a daily record of 97 Monday, the ninth time this year the city reached 90 or higher, while Newark tied a record at 99. The East Coast heat wave however will be different from the Northwest’s because it will reverse in coming days, with rain and a high of just 77 forecast for New York Friday.

This rising heat has pushed power and natural gas prices higher and even triggered rare power grid warnings for some Eastern states. Operators of the largest U.S. grid, stretching from Washington to Chicago, and another in the Midwest asked transmission and generation owners to suspend some maintenance Monday.