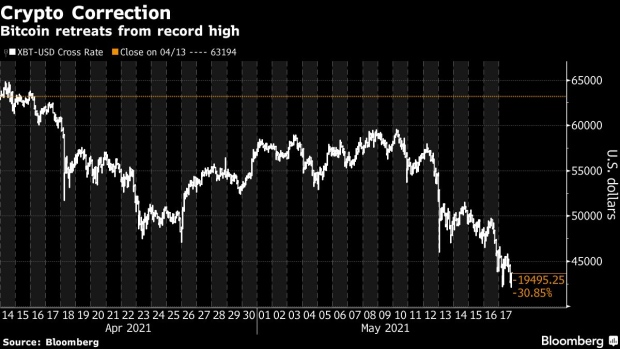 (Bloomberg) -- Bitcoin is likely to remain under pressure for weeks after tumbling about 35% since hitting a record high last month, according to one of the biggest investors in the largest cryptocurrency.

“I think we are going to consolidate for a while, four to six weeks,” Michael Novogratz, chief executive officer of Galaxy Digital LP, said in an interview, calling a $40,000-to-$50,000 price range fair.

Bitcoin fell as low as $42,133 on Monday following a volatile weekend that saw Tesla CEO Elon Musk whipsaw investors with a series of tweets in the wake of his decision to stop accepting the coin for car purchases because of its environmental impact. Bitcoin’s digital ledger uses a worldwide network of computers to function, a process that’s become known as mining.

“I took his mining comments at face value,” Novogratz said. “I don’t think that’s Bitcoin-specific, that’s everything specific: The gold market, YouTube -- all uses a lot of electricity. And Elon has businesses in clean energy.”

The cryptocurrency industry is looking at its Environmental, Social, and Corporate Governance (ESG), and how to mitigate Bitcoin’s impact through things like carbon offset credits, he said.

“Like all industries, ESG is important, and the crypto industry including Galaxy is going to address it,” Novogratz said.

Bitcoin should still finish the year higher even after the recent slide, Novogratz said. The U.S. Securities and Exchange Commission could approval of a Bitcoin exchange-traded fund at the end of this year or early next year, he said.

“My guess is the next catalyst is the ETF,” Novogratz said.

While Bitcoin continues its gyrations, New York-based Galaxy -- which hopes to list on a U.S. exchange in the second half of the year -- reported strong first-quarter results Monday. Even after the recent volatility, Bitcoin is up around 45% for the year.

Net comprehensive income, excluding non-controlling interests, increased to $860.2 million, from a net comprehensive loss of $26.9 million in the prior-year period. Counterparty trading volumes grew more than 290% year over year. Its preliminary assets under management rose to $1.27 billion as of March 31, a 58% jump from the prior quarter.

Galaxy is involved in a slew of businesses, ranging from mining to helping companies with acquisitions to investing in startups. In May, Galaxy acquired crypto custodian BitGo for $1.2 billion. Erin Brown, who was previously chief risk officer at Jump Trading, was named chief operating officer Monday.

Galaxy is currently trading more than 90 coins. The bulk of the portfolio is in 15 coins, however, including Bitcoin, Ethereum and some DeFi coins, used in decentralized-finance applications like peer-to-peer lending and payments.

“Let’s not miss the big picture for the small picture,” Novogratz said. “We are going through a once-in-a-generational shift in this crypto blockchain evolution, where the financial infrastructure is starting to be rebuilt. That process is picking momentum.”