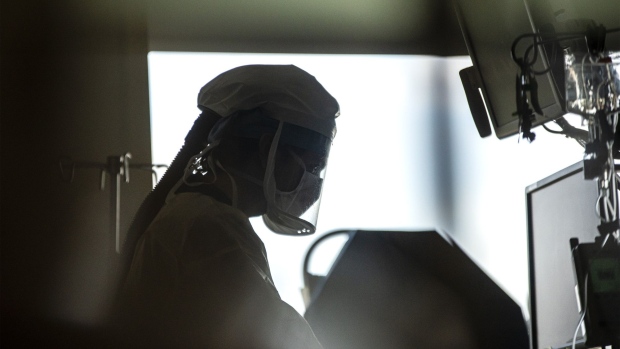 In a survey of more than 21,000 nurses conducted by the American Nurses Association, a third reported that they were out of or short of N95 masks designed to offer maximum protection in a hospital setting. Almost 60% said they’re re-using single-use protective equipment for five or more days, and 68% said their facilities mandate re-using the supplies.

“These practices contribute to nurses’ burdens of mental and emotional stress,” said Ernest J. Grant, President of the American Nurses Association. “It is both a moral and strategic imperative for our nation’s leaders to do everything possible to arm and protect nurses and other critical responders.”

In accepting the nomination at the Republican National Convention on Aug. 27, Trump touted his administration’s role in supplying health-care workers with the equipment they need to safely treat patients.

“We shipped hundreds of millions of masks, gloves and gowns to our front-line health-care workers,” Trump said, adding that supplies, testing kits, and personnel were “rushed” to nursing homes and long-term care facilities in order to protect the elderly.

Yet 42% of nurses say they are still experiencing widespread or intermittent shortages of personal protective equipment, commonly referred to as PPE. The survey was conducted between July 24 and Aug. 14.

“Re-use and decontamination of single-use PPE as the ‘new normal’ is unacceptable given the lack of standards and evidence of safety,” Grant said. About 53% of nurses responded that re-using and decontaminating masks makes them feel unsafe.

Jennifer Gil, a clinical nurse in the Emergency Trauma Department at Thomas Jefferson University Hospital in Philadelphia expressed her concern about the findings in a press briefing Tuesday.

“I was alarmed to learn from ANA’s most recent survey that for many of my colleagues, access to critical PPE that we need to care for patients is still not sufficient,” she said, adding that she regularly hears her fellow coworkers say: “I’m not sure how I can do this much longer.”