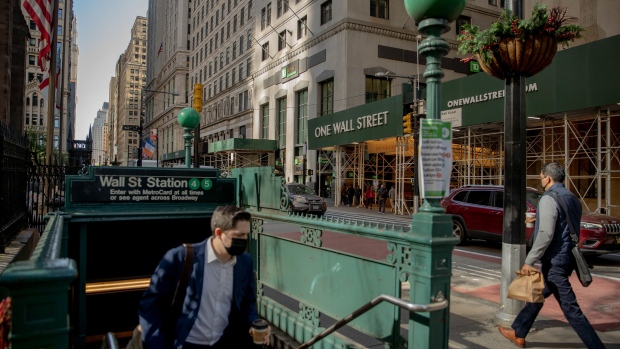 Commuters exits from the Wall Street subway station in New York, U.S., on Wednesday, May 12, 2021. With 37% of Manhattan fully vaccinated, the city's finance industry, slowly, is getting back into the office. , Bloomberg

(Bloomberg) -- New York City sales-tax revenue is likely to decline by an estimated $111 million annually as a result of people working from home, according to City Comptroller Scott Stringer.

The loss is minor when compared with the $7 billion in sales-tax revenue the city expects in 2022, Stringer said in a report Tuesday. Still, small businesses in commercial districts of the city will be hurt by lower sales, he said.

The majority of those who work in New York City also live there, and their spending near the office will be replaced by spending near their homes, reducing the impact on tax revenue, Stringer said.

Of about 1 million workers who commute into the city, about half have the ability to work remotely -- largely those in information, finance, and business and professional services that rely on computers. Industries where remote work isn’t likely an option include manufacturing and retail.

“As employment in the city’s economy increasingly declines in these industries, replaced by service sector jobs including those associated with high tech, the potentially negative impact on sales tax revenue could increase,” the report said.

Mayor Bill de Blasio said in a briefing that he hadn’t seen Stringer’s report, but was confident that more people will come back to their offices. Most city workers have returned to government buildings.

“Many many businesses found what we found, that a lot of work is done best in person,” de Blasio said Tuesday. “There will be some sense of how to handle the amount of remote that makes sense in the future, but it’s going to be less I believe than what we saw at the height of the pandemic for sure.”