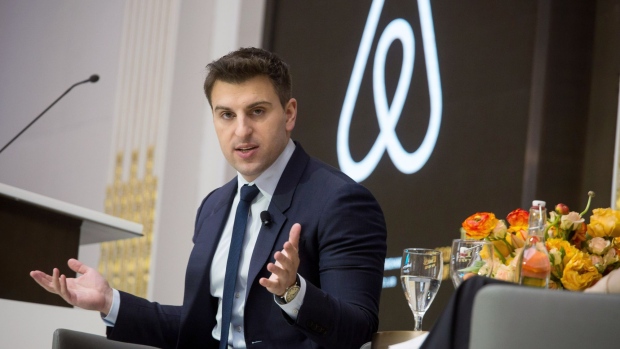 (Bloomberg) -- Barack and Michelle Obama have teamed up with Airbnb Inc. founder Brian Chesky to launch a scholarship to support college graduates looking to get into public service. The program aims to provide financial aid to alleviate the burden of college debt, as well as provide meaningful travel and networking opportunities.

Named the Voyager Scholarship, the Obama-Chesky Scholarship for Public Service has been funded with a $100 million personal contribution from Chesky to the Obama Foundation, and is intended to support 100 students in its first year with plans to expand. It’s available to students entering their junior year of college at an accredited four-year college or university in the US, who have demonstrated a financial need, and who are US citizens, permanent residents, or DACA recipients. Applications open today with a deadline of June 14.

“So many people have a passion for public service, but they don’t go into public service because they can’t afford to. They have too much financial burden looming over them,” Chesky said in the announcement video, explaining that by removing that burden, people will be able to serve their community while broadening their horizons. Accepted students are expected to be notified in September.

In addition to $50,000 in financial aid to pay for junior and senior year of college, students will receive a “Summer Voyage” work-travel experience which will include a $10,000 stipend and free Airbnb housing. After graduating, Airbnb will provide the students with a $2,000 travel credit every year for 10 years. Each fall, students will also be invited to an annual summit to meet with former President Obama and Chesky and network with other Voyagers.

“We need a generation of leaders who are willing to cooperate and build bridges, but it’s hard to build a bridge if you haven’t seen the other side of the river,” said Chesky in a news release.

Bloomberg Billionaires Index pegs Chesky’s net worth at $9.45 billion. He has personally donated millions to refugee efforts and frontline Covid charities. In 2016, he signed the Giving Pledge created by Warren Buffet and Bill and Melinda Gates where more than 40 of America’s wealthiest people have committed to giving away the majority of their wealth to tackle society’s most pressing problems.