Oil closed lower as an increase in U.S. fuel stockpiles clouded the outlook for a strong demand rebound during the summer driving season.

Futures in New York ended Wednesday close to unchanged after a choppy trading session. Domestic gasoline stockpiles rose by more than 7 million barrels last week, the most since April 2020, and distillate inventories also increased, according to a U.S. government report. At the same time, a rolling average of gasoline demand ticked lower for the first time in a month despite the country entering its traditional peak fuel consumption season last week.

“Prices have had a good run as we’ve see some demand recover,” said Gary Cunningham, director at Stamford, Connecticut-based Tradition Energy. “But, there hasn’t been a strong enough demand rebound to drive prices much higher past this US$70 mark.” 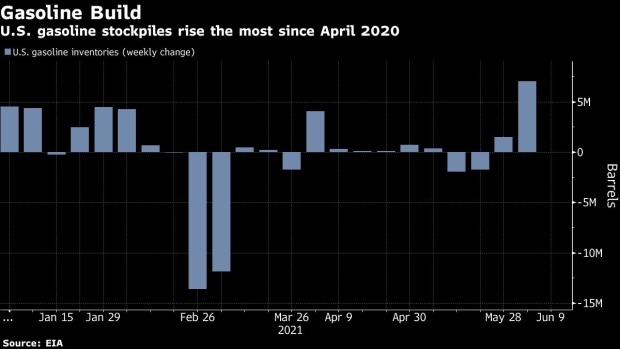 Traders have been focused on the rebalancing in the U.S., where increasing vaccinations and further reopening efforts have put the country among the forerunners in the global recovery from the pandemic. Signs that such momentum is wavering comes as COVID-19 still rages in parts of Asia and Latin America and OPEC+ gradually brings back output.

But it will likely take more than a week of growing refined product supplies to derail oil’s 40 per cent-plus rally this year. The Energy Information Administration report also showed that crude inventories fell for a third straight week to the lowest since mid-February, and refineries operated above the 91 per cent mark for the first time since January 2020. Elsewhere, there has been strength in the physical market for Middle Eastern oil as Iran’s crude shows little sign of returning soon.

Despite the rise in refined products, “we’re now even further below the five-year average on the crude side, building a bullish set-up for prices,” said Quinn Kiley, a portfolio manager at Tortoise, a firm that manages roughly US$8 billion in energy-related assets. A resolution in Iran nuclear talks “being delayed is also a positive” for the market.

Weekly gasoline supplied, which the U.S. government uses as a proxy of demand for the fuel, posted its biggest decrease since February when the country was hit by an unprecedented polar blast. The four-week rolling average for that figure also declined for the first time in a month. Gauges of demand for jet fuel weakened, despite optimism around a steady increase in passenger traffic through U.S. airports.

However, the overall pace of the U.S. consumption rebound versus the rest of the world has helped drive the discount on WTI futures against its global counterpart to the narrowest since November this week. Market participants say that buyers from abroad are starting to shy away from Permian crudes, with the narrow arbitrage making West Texas oil cargoes less attractive.