Oil steadied near a two-month high as demand withstands the omicron variant and supplies come under pressure, tightening global markets.

West Texas Intermediate closed above US$82 a barrel after U.S. crude stockpiles dropped, adding to an increasingly tight supply picture caused by outages and constraints from Libya and Nigeria to Russia. Consumption has proved remarkably resilient as the new virus strain delivers only a limited setback, the International Energy Agency said. 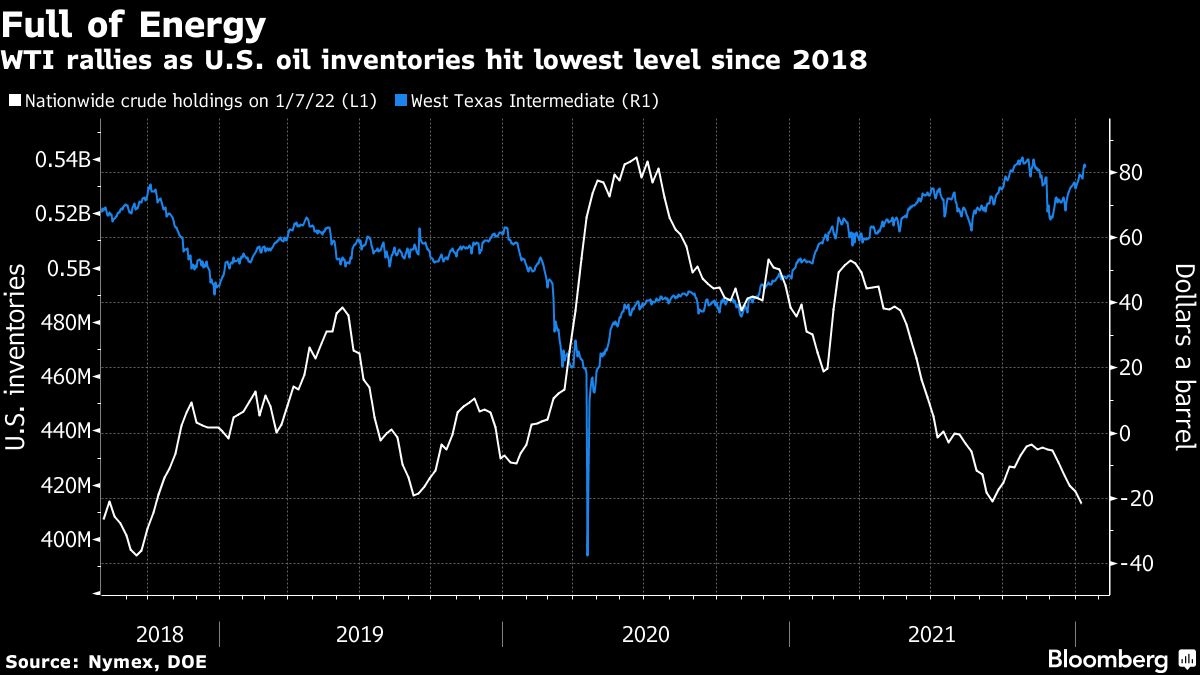 Since 2022 began WTI has surged almost 10 per cent , joining other commodities in a strong start to the year, on signals that consumption outside Asia is largely recovering from the pandemic. The IEA has said demand is stronger than expected, while the U.S. Energy Information Administration’s latest outlook showed that global oil inventories are set to decline this quarter. This comes as crude stockpiles sank to the lowest level since 2018.

Analysts warn that the low level of stockpiles could make the crude market vulnerable to price spikes in the short-term, said Ed Moya, Oanda’s senior market analyst for the Americas. “With strong growth in the U.S. and abroad, the oil market is going to remain fairly tight as demand will continue to outpace supply,”

Nonetheless, road traffic has thinned across Asia at the start of the year as the fast-spreading omicron variant sweeps through the region. Fewer vehicles have transited most capital cities so far this month than in December, according to mobility data from Apple Inc. In China, which is battling an omicron outbreak, efforts at containment are inflicting mounting economic damage.

Underlying optimism about the outlook is reflected in the market’s bullish backwardated pricing structure, with near-term contracts holding above those further out. The spread between WTI’s two nearest December contracts -- the one for 2022 and for the same month next year -- was at US$6.46 a barrel. That’s up from less than US$5 at the end of last year.