Oil pared most of its gains after President Joe Biden said the U.S. is working with major consuming nations to coordinate a collective release from strategic petroleum reserves, while continuing to spare Russian supplies from sanctions.

Futures in New York closed under US$93 a barrel and Brent slipped under US$100 a barrel after earlier soaring to as high as US$105.79 in the immediate aftermath of Russia’s invasion of Ukraine. Biden sanctioned Russia’s five major banks but said that energy supplies will be omitted from sanctions at this time. Biden also floated the potential for more oil barrels to be released from strategic reserves in coordination with other nations.

Even though futures pared gains following Thursday’s speech, the possibility for much higher prices remains, said Ed Moya, Oanda’s senior market analyst for the Americas.  “Crude’s weakness that stemmed from this round of sanctions does not change the likelihood oil prices will head much higher.”

The escalation spooked a market that was already under stress, as oil supplies around the world fail to keep pace with a vigorous recovery in demand as the coronavirus pandemic recedes. The OPEC+ coalition, led by Russia and Saudi Arabia, is struggling to restore production quickly enough, prompting some of the biggest market players to warn of higher prices. 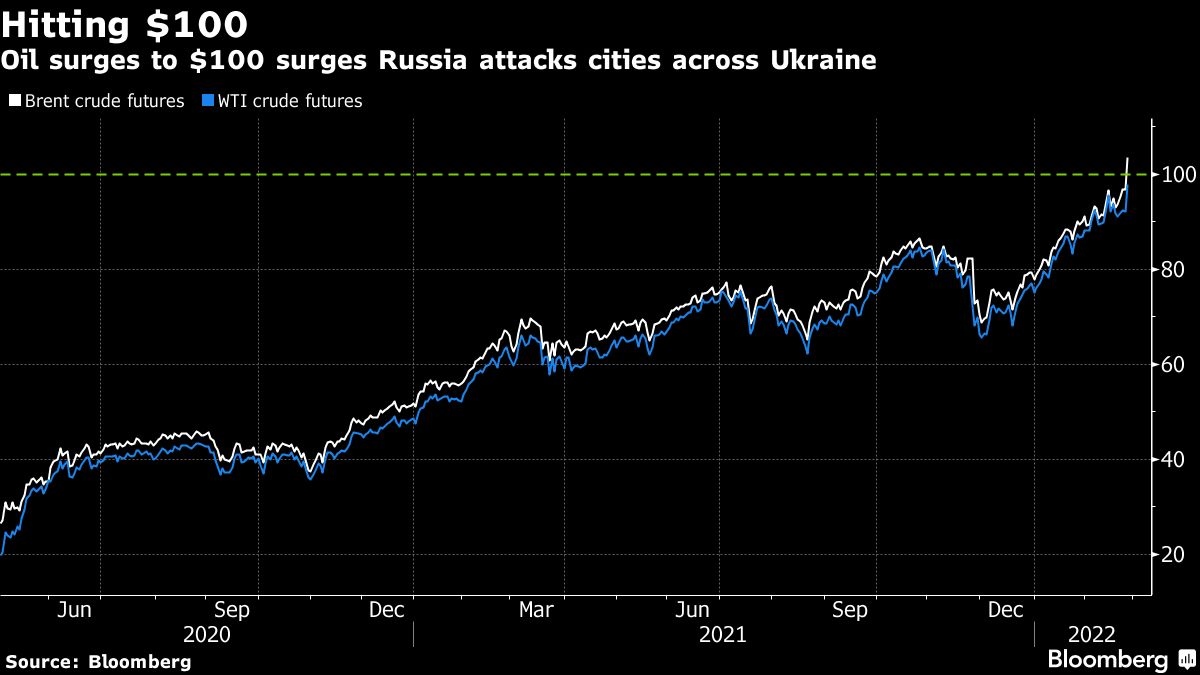 OPEC+ meets on March 2 to decide on output for April. As of Wednesday, delegates from some of the biggest members were saying that triple-digit oil wouldn’t cause them to pump faster. Their current strategy is to add 400,000 barrels a day of crude to the market each month.

Futures curves are steeply backwardated, a bullish pattern whereby near-term deliveries are more expensive than later ones as physical traders rush to secure supplies. Inventories at the U.S.’s biggest storage hub at Cushing, Oklahoma, fell to the lowest since September 2018 and are at their lowest seasonally in 14 years, according to an Energy Information Administration report.

“If they think this will threaten the stability of oil markets, I can see them putting more barrels on the market,” she said on a podcast produced by Dubai-based consultant and publisher Gulf Intelligence. It would probably be down to the likes of Saudi Arabia and the United Arab Emirates to boost output because many of the group’s other members would struggle, Nakhle said.

The U.S. and Europe will almost certainly respond in the coming hours and days with a far-reaching package of sanctions, Eurasia Group said. While Western governments will likely exempt energy transactions from sanctions, the barrage of new restrictions will force many traders to be exceedingly cautious in handling Russian barrels, they said.

Crude will probably average US$110 in the second quarter of the year if the Ukraine conflict escalates, JPMorgan Chase & Co. said this week, before Thursday’s developments. The bank sees prices retreating to average US$90 at the end of the year.

The Biden administration is considering tapping its emergency reserves of oil again in coordination with allies to counter the surge in price. The White House announced sanctions on Russia’s five banks, sovereign debt and the country’s elites. 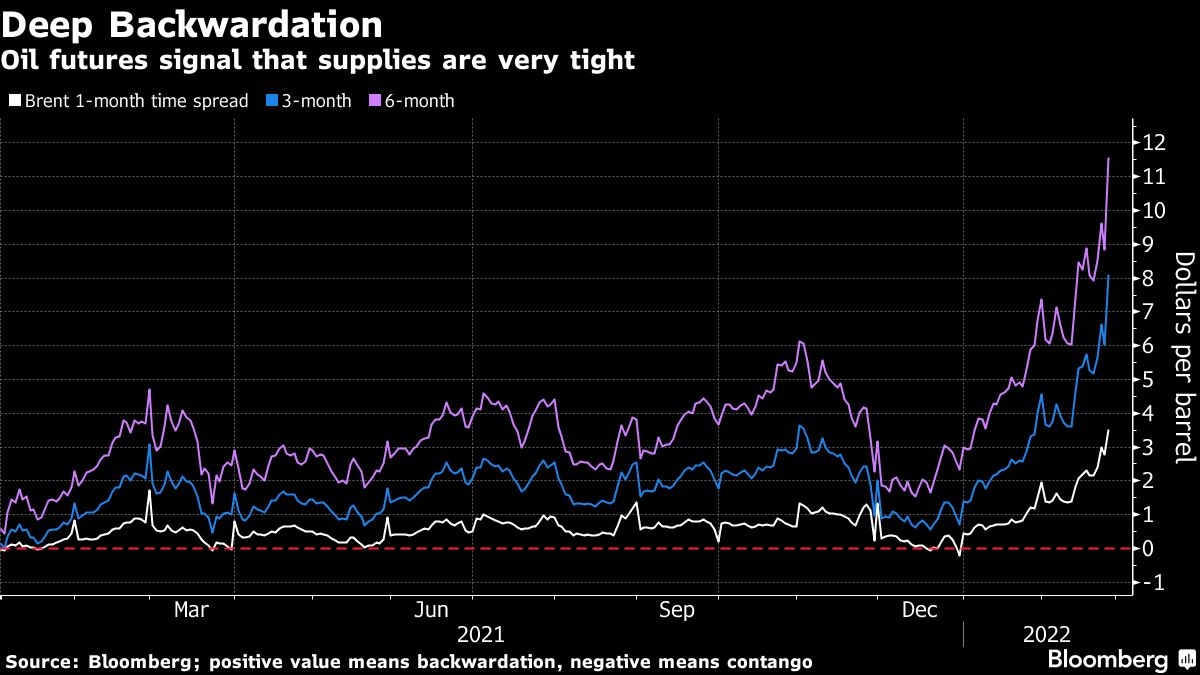 Crude’s return to triple digits completes a prodigious recovery -- barely imaginable a year ago -- as the market flips from surplus to scarcity. It reflects a global economy rushing back to normality from COVID-19 and disruptions in the exports of raw materials of all kinds.

In addition to oil and gas, Russia is a major producer of aluminum and wheat, which Ukraine also grows. The increase in the price of multiple commodities is contributing to a surge in inflation to the highest level in decades, threatening a cost-of-living crisis for millions and forcing central banks to contemplate a phase of monetary tightening that might choke off the rebound.

“Oil prices continue to surge and are now reaching levels that are uncomfortable for consumers across the world,” Toril Bosoni, head of the International Energy Agency’s markets and industry division, said in a Bloomberg Television interview. “The oil market is incredibly tight.”

While it’s a pressing concern for all consuming nations, the rally has been a particular source of discomfort for Biden, whose attempts to rein in soaring fuel costs ahead of this year’s midterm elections by deploying emergency stockpiles have met with little success.

Biden has pledged to “work like the devil” to get fuel costs under control, stressing the importance of energy security during a recent call with Saudi Arabia’s King Salman.

OPEC+ is at the heart of the supply crunch. Besides Riyadh and Abu Dhabi in the Persian Gulf, under-investment and unrest are preventing several members from reviving output following deep cuts during the pandemic. The group delivered only 70 per cent of last month’s scheduled boost, according to the IEA. The Paris-based adviser to rich countries estimates that OPEC+ is now pumping almost 1 million barrels a day of crude less than its target.

The shortfall is creating a further source of anxiety: that global spare capacity to make up for any disruptions -- whether in conflict-torn Libya, or from further drone strikes in the UAE and Saudi Arabia -- has dwindled to dangerously low levels.

Supply constraints go beyond the Organization of Petroleum Exporting Countries and its partners. Investment in new supplies worldwide has contracted as a result of the COVID slump and a diversion of capital away from fossil fuels toward renewable energy. In the U.S., shale explorers have reined in spending on higher output to pay shareholders.

It even extends beyond oil, across the full spectrum of energy derivatives and commodities markets. More raw materials are commanding a higher premium for prompt deliveries than at any point in the past two decades, according to Bloomberg calculations.

“We’re out of everything -- I don’t care if it’s oil, gas, coal, copper, aluminum, you name it, we’re out of it,” Jeff Currie, head of commodities research at Goldman Sachs Group Inc., said in a recent Bloomberg TV interview.  “I’ve been doing this 30 years and I’ve never seen markets like this.”

Russia is a key seller of commodities, with Europe relying on the nation for about a quarter of its oil and a third of its gas. This creates a profound dilemma for Western powers. Imposing a financial cost on Russia for its actions in Ukraine, for example by putting sanctions on oil and gas exports, could cause just as much pain for their own economies.