Brent crude rose 0.9 per cent after shedding more than 5 per cent Friday after financial markets were rattled by escalating concerns about the pace of rate increases by the Federal Reserve. Biden’s comments came after speaking with former Treasury Secretary Lawrence Summers, who sees a significant chance the country will find itself battling stagflation. Trading was thin Monday due to a US holiday.

Daily oil production in Libya rebounded to around 800,000 barrels a day after the country’s energy minister said recently it had fallen to between 100,000 and 200,000 a day. That implied supply disruptions in the OPEC member’s production could be smaller than traders had expected. 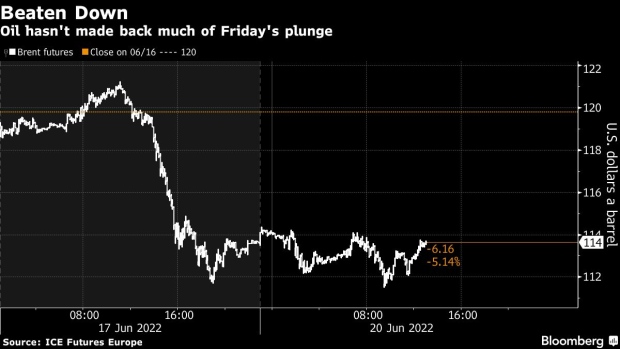 Oil has soared in 2022 as the war in Ukraine disrupted supplies just as consumption increased following the pandemic. Despite the recent pullback, the US benchmark remains set for a record-setting ninth quarterly gain, contributing to rampant inflation. Last week, the Fed increased interest rates by 75 basis points to tame price gains, and leading policy makers vowed to keep going until inflation starts to ebb.

“The market remains extremely tight, but the threat of recession is one of the few negative forces for crude prices,” said Craig Erlam, senior market analyst at Oanda. “Whether that will be enough to create anything more than two-way price action is another thing.”

Investors will hear more about the Fed’s assessment of the economy and the bank’s likely next steps when Chair Jerome Powell testifies before lawmakers later this week. On Sunday, Treasury Secretary Janet Yellen warned that high prices are likely to stick through 2022 while growth slows.

On the weekend, US Energy Secretary Jennifer Granholm warned drivers of a “continued upward pull on demand,” and the likelihood of sustained high gasoline prices.

While the US projected in its June short-term outlook that local pump prices will average about US$4.27 a gallon in the third quarter, the forecast could be “completely upended” by world events, for instance if the European Union were to fully cut off Russian oil, Granholm told CNN’s “State of the Union.”