Oil has strong shot at getting to US$150 but recession will follow: Stephen Schork

Oil maintained its gains after US government data showed crude inventories in the largest storage hub and gasoline stockpiles dropped, offering little relief to concerns about a global supply crunch.

This week’s government inventory report showed “improvement in implied gasoline demand back to 5-year averages,” said Rebecca Babin, senior energy trader at CIBC Private Wealth Management. “Both technical and fundamental factors read positive,” she said, noting WTI appears to be holding US$120, a level it’s failed to maintain over the past week. 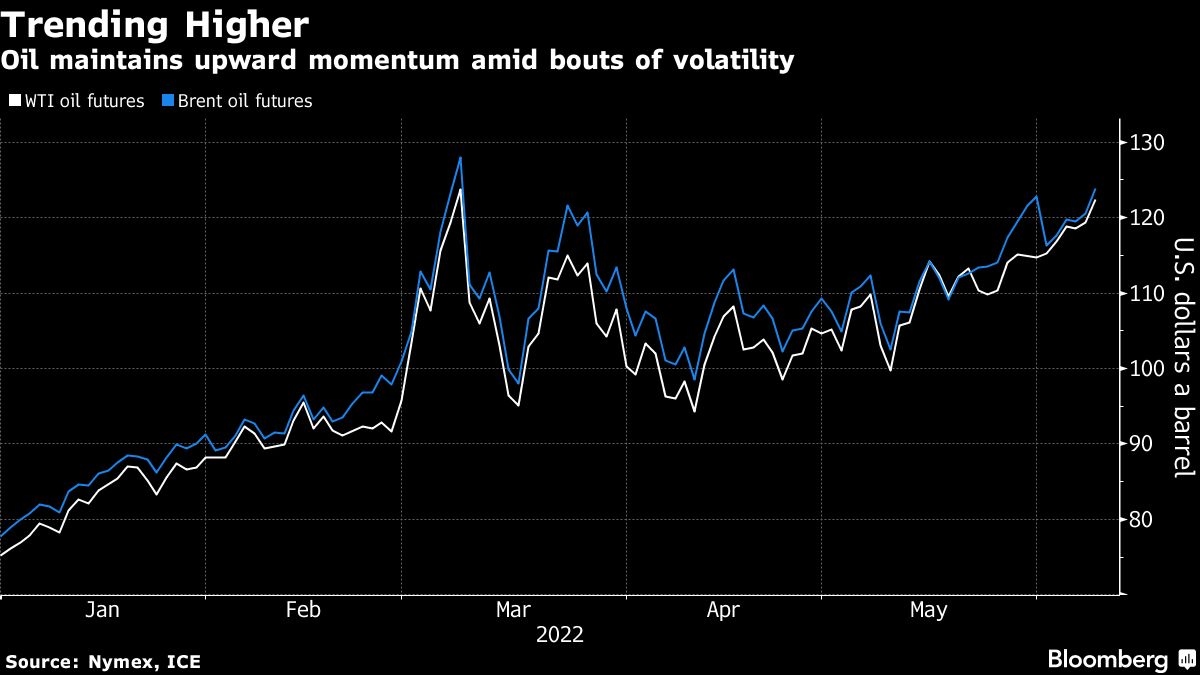 Prices rose earlier in the session on signals that China’s economy is recovering. The prospect of Chinese demand improving means crude prices could keep rising, the UAE energy minister said earlier today at a conference in Jordan. The amount of oil that producers can add to the market “is not very encouraging,” Suhail Al-Mazrouei added, highlighting concerns about spare production capacity in the oil market.

The comments came after banks including Goldman Sachs Group Inc. and Morgan Stanley underlined calls for higher prices in the coming months.

Shrinking inventories of refined products at the start of summer underscore a fundamentally tight supply situation. The four-week average for gasoline demand rose to 9 million barrels a day for the first time this year following Memorial Day weekend, which is the traditional kick off to the summer driving season. Demand is rising even as the national average price for gasoline, already at a record, approaches US$5 a gallon.

Diesel prices are surging faster than gasoline, with an unusually hefty premium for this time of year with the rest of the world is relying on the US to supply the most widely used oil product in Europe. An EU measure to forbid purchases of Russian refined petroleum products in the coming months is exacerbating an already tight fuel market.

The oil market has maintained its upward momentum this year as economies rebounded from the pandemic, though Russia’s invasion of Ukraine and a virus resurgence in China has led to extreme volatility. Beijing continues to roll back its COVID-19 curbs as infection rates ease. Last week, OPEC+ lifted output by more than it had previously planned, though the group has struggled to meet its targets in recent months.