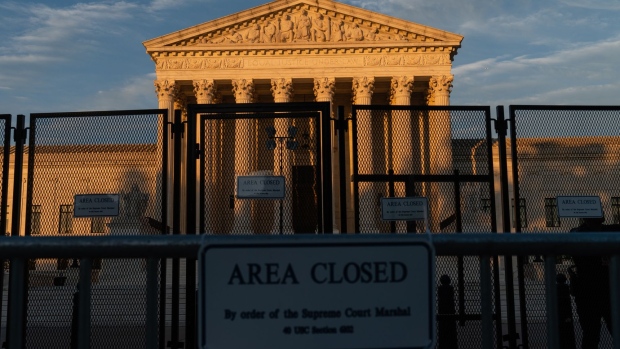 The US Supreme Court in Washington, D.C., US, on Monday, June 27, 2022. A CBS News poll suggested that a majority of Americans disapprove of the Supreme Court's decision overturning the constitutional right to an abortion, which is inflaming a partisan divide on display in comments by senior lawmakers. Photographer: Eric Lee/Bloomberg , Bloomberg

(Bloomberg) -- A coalition of abortion providers asked the Oklahoma Supreme Court on Friday to block enforcement of the state’s criminal abortion laws and to declare access to the procedure protected under the Oklahoma constitution.

It’s the third such challenge filed directly at the Oklahoma high court since the US Supreme Court signaled it would strike down the landmark Roe v. Wade decision, which it did last week, as abortion-rights supporters try to overcome increasingly stricter prohibitions on terminating a pregnancy unless the patient’s life is in danger.

Abortion has been completely unavailable in Oklahoma since May 25, when Republican Governor Kevin Stitt signed into law two civil bans that took effect immediately and were enforced through vigilante citizen claims against anyone who performed the procedure. After the Roe decision, the state’s Republican attorney general announced June 24 he would immediately enforce a 1910 criminal ban on the procedure.

“Today, we are asking this court not only to quickly block the state’s cruel abortion bans, but to do its job and protect the people of Oklahoma,” Alexis McGill Johnson, president and chief executive officer of Planned Parenthood Federation of America, said in a statement. “Already, thousands of Oklahomans have been forced to either find a way to get out of state for essential care or carry a pregnancy to term -- bearing the serious risks that come with it. We will bring everything we have until access might be restored.”

Lawyers for the clinics claim the Oklahoma constitution includes protection for the “inherent right to personal autonomy and bodily integrity,” as well as for due process.

They are asking the high court to consider their request on an emergency basis and temporarily block the 1910 and 2022 bans from being enforced. They also seek permanent injunctions preventing either ban from being enforced and a declaration that the 1910 law was effectively repealed, since it hasn’t been enforced since the Roe decision in 1973.