As Canada's cannabis market reaches another level of maturity, industry consultancy Brightfield Group sees a significant shift in how Canadian consumers engage with the product. Product usage and demographic profiles have shifted considerably since Canada legalized cannabis, offering producers and retailers alike a different perspective in what items could be a success or what could be deemed a failure. Here's a look at four trends observed by Brightfield in the Canadian market following a quarterly survey of 3,000 adult cannabis users released by the consultancy on Friday: 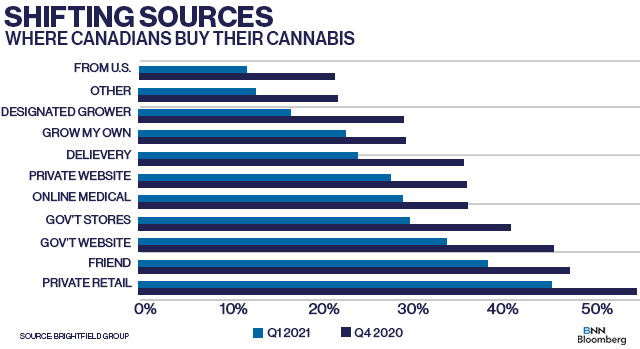 Seth Rogen's Houseplant brand and its Canadian partner Canopy Growth Corp. have amicably parted ways, according to a release from both companies​. The two began working together in 2018 with a number of flower and infused beverage offerings, the latter of which found some success in the nascent market segment. Houseplant launched about a year ago in the U.S. market but Canopy was not a partner in that venture. It is unclear how Houseplant will continue to operate in the Canadian market, but a statement from Rogen said the brand plans to "evolve" in Canada.

Shares in Canadian cannabis giant Tilray Inc. soared after it reported its fiscal fourth-quarter results this week, reporting US$142.2 million in revenue and US$12.3 million in adjusted EBITDA. Analysts expected Tilray to report US$150 million in revenue in its fourth quarter while posting US$5.8 million in EBITDA. Canadian cannabis sales were up 36 per cent in the quarter to US$53.7 million. Tilray CEO Irwin Simon told BNN Bloomberg that he's lobbying federal and provincial regulators to find a better way to advertise Tilray's cannabis products to Canadians. Simon also commented on Tilray's plans to head south of the border, with an expectation the company is exploring acquisitions of a U.S. cannabis operator through an option deal ahead of U.S. lawmakers passing a legalization bill.

Pre-roll joints are seeing a surge in sales as more people opt to minimize the sharing of cannabis amid the COVID-19 pandemic, according to a report commissioned by Canopy Growth. The report - released in conjunction with a new Canopy pre-roll product launch - found that pre-roll sales were up 48 per cent across the entire market between January and May 2021. A total of $97 million of pre-rolls were sold in the fiscal year ending March 2021, up from $42.6 million, according to the Ontario Cannabis Store.

Canadian cannabis industry contributed north of $18B to GDP in May: StatsCan

Statistics Canada said Friday that the country's cannabis industry - which includes the illicit market - contributed $18.3 billion to the country's economy in May, crossing the $18 billion mark for the first time. The legal industry represented about $12.6 billion of that figure while the illicit segment continued its gradual decline and influence on the broader market, accounting for $3.79 billion in economic activity. Cannabis producers accounted for the bulk of the industry's GDP contribution with $16.4 billion, while retailers accounted for about $2 billion. 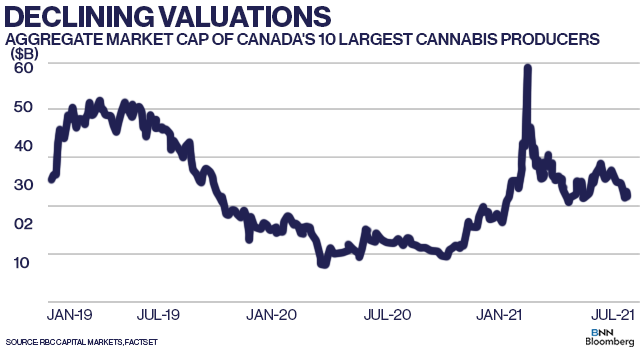 While the Canadian cannabis market continues to grow, RBC Capital Markets Analyst Douglas Miehm notes that the valuations of many Canadian licensed producers are down materially from their highs last seen in February during frenzied speculation about the U.S. moving closer to legalizing cannabis. He sees that decline occurring from weaker-than-expected results from several cannabis companies as well as how COVID-19 restrictions and changes to how some provincial wholesalers manage their inventory. Overall, share prices of a basket of Canadian cannabis companies are still up roughly 32 per cent since the beginning of the year, Miehm noted. "On a fundamental level, we believe valuations can be supported by a recovery from COVID-19 leading to a resumption in growth within the Canadian cannabis market," Miehm said in a report to clients this week. "Additionally, increased balance sheet strength, and cost reduction initiatives should support further valuation upside." Miehm forecasts Canada's cannabis sales to hit $3.8 billion this year, trimming a previous estimate of $3.9 billion, while the country should see 2,700 licensed cannabis retailers by the end of the year

CANNABIS SPOT PRICE: $5.39 per gram — This week's price is down 2.2 per cent from the prior week, according to the Cannabis Benchmark’s Canada Cannabis Spot Index. This equates to US$1,953 per pound at current exchange rates.

“Marijuana, as I understand it, is less addictive than alcohol. So why is alcohol legal and marijuana isn’t?”

- Billionaire and major Republican Party donor Charles Koch on why he's investing $25 million to help legalize cannabis in the U.S.