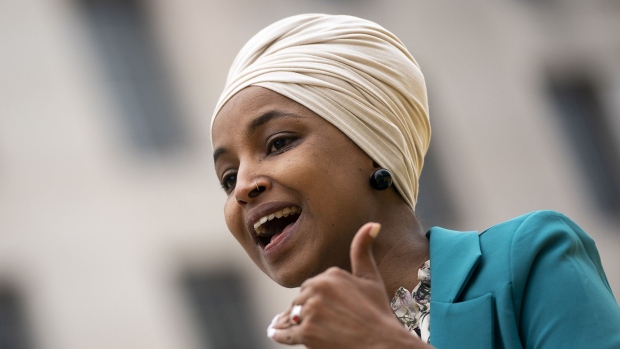 (Bloomberg) -- Representative Ilhan Omar tried to head off a growing furor over a tweet suggesting she equated the U.S. and Israel with the Taliban and Hamas that drew condemnation from some Democrats as well as Republicans.

A dozen of Omar’s fellow House Democrats denounced Monday’s tweet in which she said there were “unthinkable atrocities committed by the U.S., Hamas, Israel, Afghanistan, and the Taliban.”

Representative Bradley Schneider of Illinois and 11 other Democrats called the statement “as offensive as it is misguided,” accusing Omar of “false equivalencies give cover to terrorist groups.”

Omar was initially defiant, tweeting Thursday in response to their statement that it was “shameful for colleagues” to criticize her without reaching out to her first. “The Islamophobic tropes in this statement are offensive,” Omar, one of two Muslims in Congress, said in the tweet. “The constant harassment & silencing from the signers of this letter is unbearable.”

Her spokesman, Jeremy Slevin, blamed far-right Republicans and even Democratic colleagues for “ginning up hate” against Omar.

Omar later put out a statement saying she was referring to questions during a House Foreign Affairs hearing she put to Secretary of State Antony Blinken about International Criminal Court investigations “not a moral comparison between Hamas and the Taliban and the U.S. and Israel.”

“I was in no way equating terrorist organizations with democratic countries with well-established judicial systems,” Omar said.

Her questions to Blinken however didn’t use the same language as her tweet, which included a video from the hearing.

Speaker Nancy Pelosi and other members of House Democratic leadership put out a joint statement Thursday afternoon saying that drawing any comparison between the U.S. and Israel and terrorist groups like Hamas and the Taliban “foments prejudice and undermines progress toward a future of peace and security for all.”

“We welcome the clarification by Congresswoman Omar that there is no moral equivalency between the U.S. and Israel and Hamas and the Taliban,” the statement said.

Republicans called on every House Democrat to join those already critical of Omar. Her comments also drew swift criticism from the American Jewish Committee.

Omar also triggered a controversy shortly after joining the House in 2019 for remarks that critics said accused supporters of Israel in the U.S. had dual allegiances. The House later approved a resolution condemning “anti-Semitism, Islamophobia, racism and other forms of bigotry,” though it didn’t mention Omar by name.

This latest controversy comes as Republicans have questioned why Democratic leaders have not been more forceful in calling out our punishing some of their own House members, as they have freshman GOP Representative Marjorie Taylor Greene of Georgia for some of her comments and pushing of conspiracy theories.

Greene has been stripped of her committees, and Schneider next week is set to introduce a new resolution to censure Greene for her recent comments for comparing COVID-19 vaccinations and mask-wearing rules to the Holocaust.