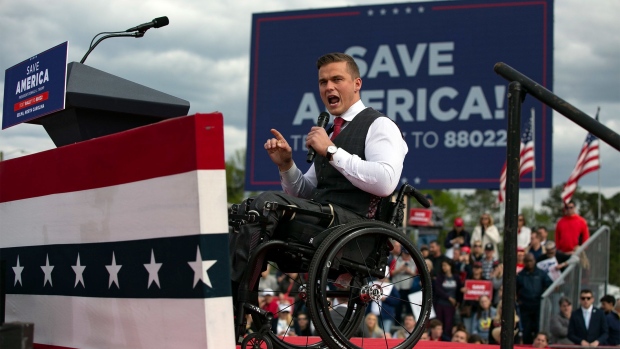 (Bloomberg) -- Madison Cawthorn is a telegenic pro-Trump Republican running in a solidly GOP North Carolina district. And yet the youngest member of Congress is facing a fight to get re-elected.

Cawthorn, 26, had been a rising star in the Republican Party. But since taking office in 2020, he’s also been a magnet for scrutiny and criticism over his statements, social media posts and run-ins with authorities. All of that has drawn him seven opponents in Tuesday’s GOP primary and the scorn of party elders.

The state’s other Senator, Thom Tillis is supporting one of Cawthorn’s top primary opponents, state Senator Chuck Edwards, and has been vocal critic.

“I believe if North Carolinians are informed, then it’s going to be a challenge for him to get the nomination,” Tillis said earlier this month.

News about incidents involving Cawthorn spreads quickly. Cawthorn, who is partially paralyzed as the result of a car crash, several times has been cited for traffic violations since being elected and twice has been stopped for trying to bring a loaded handgun through airport security.

At a town-hall event in March, he called Ukrainian President Volodymyr Zelenskiy a “thug” and said the country’s government is “incredibly corrupt and it is incredibly evil.” That angered many of his Republican colleagues in Congress and drew a rebuke from House GOP leader Kevin McCarthy.

That triggered a summons to a private meeting with McCarthy and Steve Scalise, the chamber’s No. 2 Republican. McCarthy said later there was “no evidence” behind Cawthorn’s remarks.

“I just told him he’s lost my trust,” McCarthy told reporters after the meeting. “He’s got a lot of members very upset.”

Cawthorn has responded with defiance and pivoted from blaming Democrats for the emergence of embarrassing videos and social media posts to the party establishment, whom he labeled Republicans in name only.

Representatives of Cawthorn didn’t immediately respond to requests for comment.

Even as some Republicans are backing away, Cawthorn spoke at a rally for former President Donald Trump in April. And a few of his colleagues offer a measure of sympathy.

On top of his personal scandals, Cawthorn’s political sins in the state have made him an easy target. As North Carolina was in the process of redistricting, Cawthorn decided to run in the adjacent district, only for the borders to change and him to turn around and run in his district.

There has been little independent polling in the district. But a survey by GOPAC Election Fund, a Republican group, found Cawthorn’s support fell 11 percentage points from 49% in late March to 38% in late April. Support for runner-up Edwards has risen from 14% to 21% during that time. If no candidate receives more than 30% on primary day, the top two candidates will head to a runoff on July 26.

Edwards recently ran an ad featuring Instagram screenshots of Cawthorn, contrasted with images of him reviewing paperwork and meeting with constituents.

“They call it Instagram famous: famous for what you post online. They show us their workout, what they eat, where they go, but they accomplish nothing,” Edwards says in the ad. “I’ll take the fight to Congress and leave social media to the other guys.”

Doug Heye, a Republican strategist who grew up in North Carolina, said that Cawthorn is on the ropes because he’s a poor fundraiser, an unreliable member of the Republican caucus and constantly surrounded by personal scandals. While there are some members of the House who have done those things, few have done them all at once, he said.

“There was one day where it seemed like there were three different scandals that happened in a day,” Heye said. “Any time you see a Madison Cawthorn headline, you know that he’s said or done something that’s not in the interest of his constituents.”