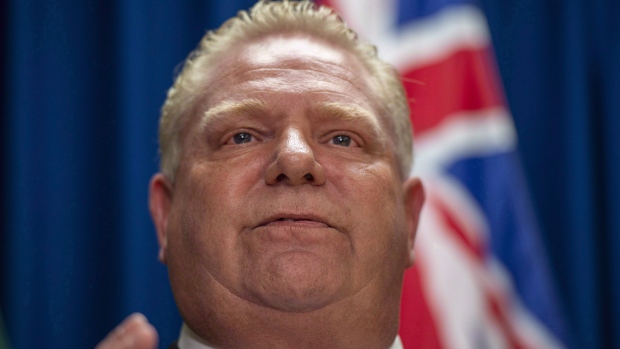 TORONTO -- The cancellation of the cap-and-trade system will cost $3 billion in lost revenue over the next four fiscal years, Ontario's fiscal watchdog said Tuesday, warning the decision would push the provincial budget further into the red.

Financial Accountability Officer Peter Weltman said the loss of revenue from cap and trade will be greater than the savings the government will achieve by cancelling spending associated with the program.

The new Progressive Conservative government revised the deficit to $15 billion last month, up from $11.7 billion predicted by the province's auditor general.

Weltman could not immediately say what the province's deficit would be after factoring in the loss of revenue from cap and trade, but added that his office would provide an update on Ontario's deficit later in the fall.

The FAO also estimated that in the long run, the cap-and-trade system would have cost Ontario families less than the federal carbon tax. The federal government has indicated it plans to return the money raised by the tax directly to residents in the provinces opposed to the plan.

Under cap and trade, the typical Ontario household would pay $312 annually in additional costs by 2022, said the FAO, compared to $648 under the federal system by the same year.

Premier Doug Ford campaigned on a pledge to cancel cap and trade during the spring election and has vowed to take Ottawa to court over its decision to impose a carbon tax.

The province has introduced legislation to repeal the system, which was introduced by the previous Liberal government and puts caps on the amount of pollution companies in certain industries can emit. If they exceed those limits, they must buy allowances at auction or from other companies that come in under their limits.

Environment Minister Rod Phillips said the government is keeping a promise it made to Ontarians during the election.

NDP energy and climate change critic Peter Tabuns said cancelling cap and trade will hurt the environment and the lost revenue will have large implications for the province's books.

"The direct result of Ford's favour to big polluters will be $3 billion in costs piled onto the backs of the people of Ontario," he said in a statement.

Green party Leader Mike Schreiner said the FAO's review shows Ford's cancellation of cap and trade is a "$3 billion boondoggle" that will send the province deeper into a fiscal hole.

"Premier Ford is putting politics and ideology over evidence, and it comes with a $3 billion price tag that the Conservatives are not being honest about," he said in a statement. "The FAO report reveals the real financial consequences of Ford's 'cut first; think later' approach to governing. He rushed to cancel cap-and-trade to make good on an ill-conceived campaign slogan. Now we are learning about the financial consequences."

"Rather than spending another $30 million on a lawsuit to try to block federal action on climate change, the premier should focus on how he can create good, green jobs that position Ontario to thrive in the new low-carbon economy," he said.