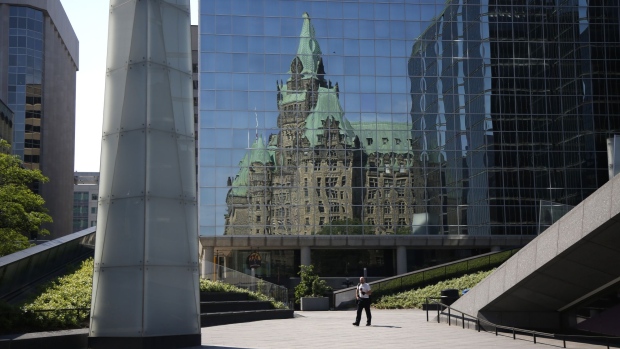 Parliament Hill in Ottawa, Ontario, Canada, on Wednesday, June 2, 2021. The Canadian dollar was one of the best performers among Group-of-10 currency peers before a Bank of Canada decision Wednesday and as traders look to U.S. inflation data Thursday to gauge the direction of monetary policy. , Bloomberg

“The province will continue to monitor developments related to sustainable bonds, and may consider issuing in the future,” Scott Blodgett, a spokesperson for the Ontario Ministry of Finance, said in an email. “Although Ontario funds projects which have both environmental and social benefits (e.g. hospitals), the province is focused on green bonds.”

Sustainable bonds are gaining popularity among issuers partly because the use of proceeds tend to more flexible than green bonds. They also allow borrowers to tap into the increasing pool of ESG-focused investors, which in turn can mean pricing securities at tighter spreads than conventional debt sales.

Bank of Nova Scotia told investors earlier this week that it is migrating its green bond framework to a sustainable bond program before pricing its debut issuance of such debt in the U.S. dollar market. The US$1 billion offering was sold at a tighter spread than where a transaction of regular bonds would had been priced, according to an analysis of the deal.

Ontario, the world’s largest sub-sovereign debt issuer, issued $2.75 billion (US$2.2 billion) of eight-year green bonds in a record for the Canadian dollar market. The transaction which got an order book of more than $3.4 billion was priced at 58 basis points over the Canada government bond yield curve. That’s around 1.5 basis points tighter than where a comparable regular debt issue would have priced, people familiar with the deal said.

“At this time, it would appear that Ontario’s green bonds are typically issued at slightly lower yields as compared to conventional Ontario bonds of similar term and size,” said Blodgett.

Sales of environmental, social and governance-labeled bonds in Canadian dollars have reached $13.4 billion for the year, the data show. That’s already an annual all-time high and compares with the previous record of $9.5 billion sold in all of 2019. Sales of such debt are expected to keep growing with the federal government aiming to raise $5 billion through its inaugural issuance of green bonds during this fiscal year ending in March 2022, the government said in April.

“Ontario has a mature green bond program and expects green bonds to continue having an important role in the province’s annual borrowing,” said Blodgett, adding that Ontario has already raised $21 billion of about 39 per cent of its borrowing requirement for the current fiscal year. “Subject to market conditions, Ontario plans to continue to issue multiple green bonds each fiscal year, including in 2021 and 2022.”