The Ontario Cannabis Store is shaking up how it plans to launch new products to the provincial marketplace, a move that could have serious implications for big and small producers alike.

The provincially owned cannabis wholesale and online retailer told pot companies whose items it sells that it will postpone the next product call, a crucial window where companies disclose what items they plans to offer the marketplace, into next April. That means that after the current call ends in mid-August, producers will have eight months until they can pitch their wares to the OCS again, a slightly longer period than for previous product calls.

Bev Altberg, vice-president of merchandising for the OCS, told BNN Bloomberg the shift would help better curate the assortment of products Canadian consumers may want to buy in the legal market instead of flooding retailers with items that may or may not sell.

"Let me understand your [company’s] innovation, what genetics are you growing now, how are you thinking about innovation and does that coincide with the trends that we're seeing in the position that we are, where we have all the access to information," Altberg said in a phone interview.

"There should be a much, much tighter alignment with our [licensed producer] partners and our category managers, which is something that LPs have been asking for. That makes sense because an LP doesn't want to sink capital and time into growing something that may or may not be accepted into the largest market."

As the main wholesaler in Canada's biggest consumer market, the OCS has a particularly outsized influence on the country's cannabis industry. Shifting around a key product launch window may have ripple effects across the sector, affecting how producers ship new releases to other provinces.

Producers will likely be reworking many of their annual plans in light of the OCS's moves, said Brazeau Seller Law Partner Trina Fraser, who specializes in cannabis legal matters.

Companies need to manage their "production capacity within their facility, their ingredient procurement, packaging materials, marketing plans and all of these things which are built around a forecast," she said.

Pablo Zuanic, research analyst at Cantor Fitzgerald, said in a report to clients Friday that improving how the OCS orders new products may be positive over the long term, notably for better-run producers.

"We realize the pick-up in retail sales will take time, as consumers adjust consumption patterns even though in-store dispensary traffic is now widely allowed," Zuanic said.

"Although it does impact our planning for next year, the OCS’s interaction and feedback process is welcomed.  The changes are necessary in the process and it’s the right step forward for the industry," Berrin Noorata, chief corporate affairs officer at Tilray, said in an email.

But there will undoubtedly be some disappointment among small to mid-sized cannabis companies struggling to carve a place for themselves in what’s been an extremely competitive space. While some craft producers have gradually gained market share from bigger players, they may not have the resources needed to stay afloat until the next product call window opens up.

Max Zavet, chief executive officer at Robes Cannabis, which sells the BLLRDR brand, said the OCS's changes will be "definitely frustrating" for some smaller or newer entrants.

"If we don't get any listings in, it could be very challenging for us," Zavet said. "We do get some of the products in with the OCS's product call and we are flexible enough to survive, but if we didn't, then it would be a big problem for sure."

While Altberg acknowledged that some companies may struggle for sales, she noted that these changes will ultimately benefit the cannabis industry.

"Every single partner on the phone as we ran the assignment said that short-term pain will be worth the long-term benefits of being able to longer plan out and align on innovation windows," she said.

Canadian pot sales climb 2.3% to $313M to record monthly high in May

Canadians bought $313.3 million worth of cannabis products in May, an increase of 2.3 per cent from the prior month but down 1 per cent on a per-day basis, according to Statistics Canada. Compared to the same month a year earlier, Canadian cannabis sales were up by 68 per cent. Canada's legal recreational pot industry currently operates at an annual run rate of about $3.76 billion. Ontario led all provinces with $111.2 million in sales; the province also accounted for more than one-third of all retail activity. According to The Cannalysts Analyst Craig Wiggins, trailing three-month sales numbers were up 9.4 per cent, a five-month high and a strong sign that retail revenue are still growing at a healthy pace.

Pot giant Canopy Growth is being taken to court by liqueur-maker Cointreau for trademark infringement, according to The Canadian Press. Cointreau, which has made its sweet and bitter orange liqueur since 1875, filed a lawsuit against Canopy at a New York court last week over the name of the cannabis producer's Quatreau line of sparking cannabidiol beverages. Cointreau argued in a complaint that Canopy "adopted Quatreau instructing consumers to pronounce it as 'kwatro' … in order to unfairly capitalize on the goodwill and reputation of the Cointreau mark." Cointreau is seeking a permanent injunction to keep Canopy from infringing on its trademarks, profits from the products and for the company to cover its court costs. Canopy declined to comment on the lawsuit.

A London, Ont.-restauranteur launched a petition pushing the federal and provincial policymakers to permit cannabis consumption lounges and businesses in Canada. Global News reports over 10,000 Ontario residents have signed a petition by Jeremy Smith, who plans to open a cannabis restaurant called Les Munchies, as he seeks to advance his cause to provide healthy cannabis-infused food options. Current laws prevent the sale of cannabis-infused food unless the facility (in this case, a kitchen) has the right processing and sales licenses from Health Canada. Smith currently has the support of Timmins-James Bay NDP MP Charlie Angus and is in talks with provincial politicians who may raise the issue at Queen’s Park this fall.

Cresco Labs CEO Charlie Bachtell thinks draft legislation, which could legalize cannabis in the U.S., would allow American pot firms to access crucial financial services and to easily obtain much-needed capital. In an interview on BNN Bloomberg, Bachtell said that "Big B"-type of banking services, including access to more capital and debt, would finally be available for companies if cannabis is legalized in the U.S.  "'Big B banking' is where you have access to capital, you have access to leverage, where you could get credit facilities that allow you to smooth out cash flow and really create scale in a way that you would think from a traditional industry can," Bachtell said. Legalization would lead to a wave of institutional investor interest into the U.S. cannabis market, Bachtell added. Institutional funds control about 4 per cent of all U.S. cannabis company shares, compared to 15 per cent for Canadian operators.

Amazon has formally thrown in its hat to lobby for legal cannabis in the U.S. The news — which was first reported by Cannabis Wire — comes more than a month after Amazon declared its support for Marijuana Opportunity Reinvestment and Expungement Act of 2021, a bill introduced in U.S. Congress that would legalize marijuana at the federal level, expunge criminal records, and invest in impacted communities. While Amazon's registration to lobby on behalf of that bill isn't much of a surprise, the effort would make it largest and most mainstream company to support legalization in the world's biggest consumer market. Politico reporter Natalie Fertig also tweeted that Amazon will now be able to actively talk to lawmakers and put resources into supporting the passage of the MORE Act bill into law.

ATB Capital Markets Analyst David Kideckel expects Canada's recreational cannabis market to reach $8 billion in sales by 2025 and $12.3 billion by 2030 in an updated forecast released earlier this week. That compares to a previous estimate $9.4 billion by 2025 as growth expectations were trimmed down to 15 per cent from earlier projections of 19 per cent. The total addressable market for cannabis in 2030 is pegged to be $13.6 billion, which includes an estimated $700 million for the illicit market. ATB Capital Markets now sees the average annual spend for cannabis products to grow to $1,354 by 2030 from $942 in 2019 as more consumers buy higher-priced derivative products such as edibles and taking into account price inflation. The firm also expects illicit sales to continue ramping down by gradual five per cent pace annually as well. While the market will continue to remain competitive due to fragmentation and consolidation, Kideckel said that cannabis companies with "a robust capital position and a clear strategy" would cement themselves as industry leaders.

— The amount of Canadians estimated to purchase a cannabis product in 2030, according to ATB Capital Markets. 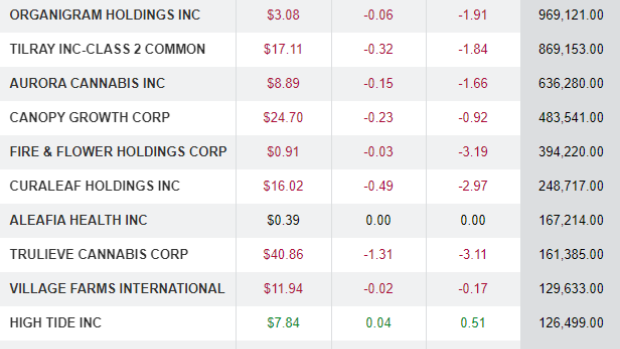