OPEC+ will adjust its output target and redistribute production cuts between its members under pressure from Saudi Arabia, which has long carried an outsized share of the burden.

The group, which pumps more than half the world’s oil, agreed in Vienna on Friday to reduce its output target by 500,000 barrels a day, said a delegate, bringing it in line with recent production levels. Saudi Energy Minister Prince Abdulaziz bin Salman gave a clear signal before the meeting that his priority was to get some members to stop cheating and implement the cuts they have promised.

“Like religion, if you are a believer you have to practice. And without practice you are an unbeliever,” Prince Abdulaziz said at the opening session of Friday’s meeting. “The market will have to trust us. The analysts will have to believe us” and if they don’t “we cannot deliver what we want to achieve. It is as simple as that, and sometimes it is as tough as that.” 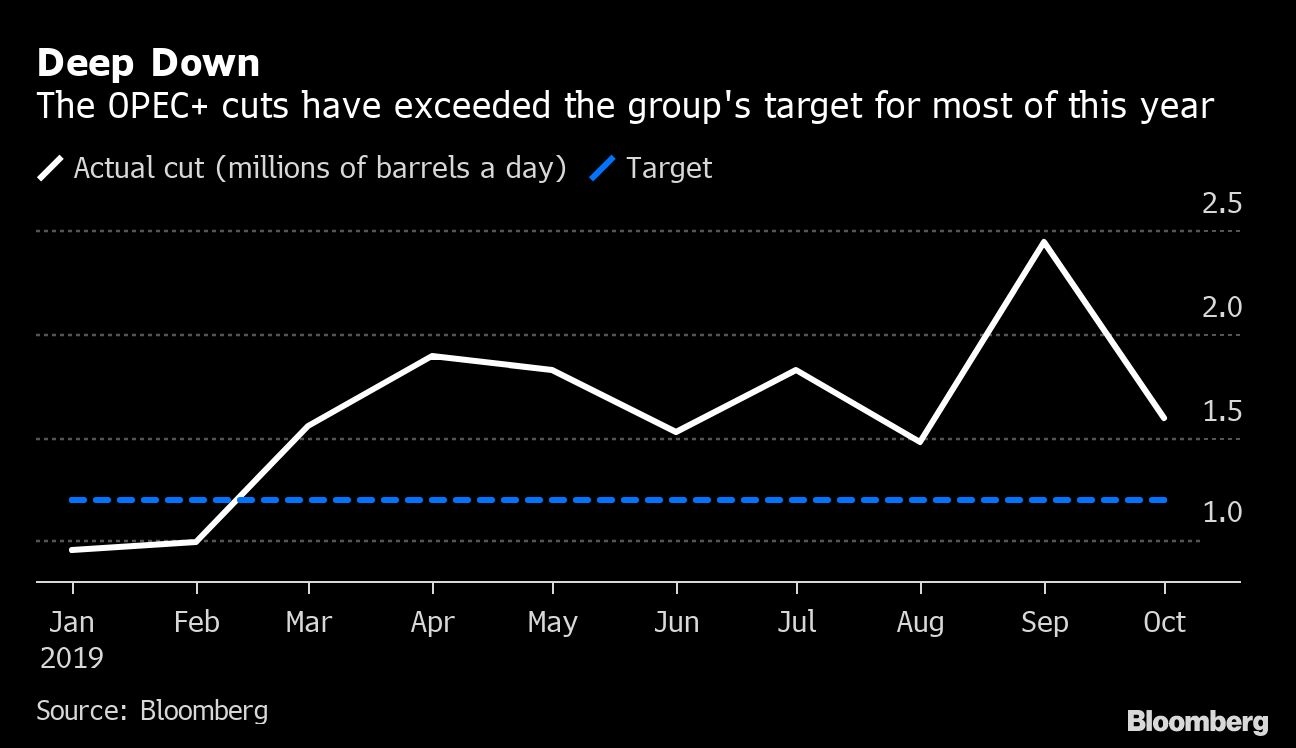 After days of rumor and mixed messages that whipsawed prices, the shape of the adjusted deal between the Organization of Petroleum Exporting Countries and its allies gradually emerged. Oil futures fell in New York on Friday as it became clearer that the group wasn’t planning to remove any additional barrels from the market.

Instead, delegates said it would rejig its deal to formalize the extra supply reductions some of its members, notably Saudi Arabia, have already been making for most of the year. Then it would share them out more equitably among the countries that have consistently failed to meet their targets.

Saudi Arabia, the world’s largest oil exporter and the group’s defacto leader, will continue to pump at current levels under the new agreement, said delegates, who asked not to be named because the information isn’t yet public.

For the market “that’s a nothing-burger, that’s almost a rollover by any other definition,” said Bob McNally, president of Rapidan Energy Group and a former oil official at the White House under President George W. Bush. But it achieves what Prince Abdulaziz wanted “and I think he’s going to put more pressure than anyone has before to get real cuts from these guys.”

Under the new deal, the size of the OPEC+ daily production cuts target will be increased from 1.2 million barrels to 1.7 million barrels, compared to a baseline of October 2018, according to ministers including Russia’s Alexander Novak and Iran’s Bijan Namdar Zanganeh. That doesn’t require the group as a whole to pump less oil, since it was already implementing an additional cut of that size in October 2019.

Saudi Arabia, wishing to lead by example, has pumped well below its quota of 10.3 million barrels day for the duration of the agreement. The kingdom’s output averaged 9.8 million so far this year, according to data compiled by Bloomberg. Other nations including Angola, Azerbaijan and Mexico have simply been unable to sustain their production due to natural declines.

The “adjustment cannot really be interpreted as something that effectively changes the expected oil balance,” consultant JBC Energy GmbH said in a note. “It is more of a compliance maneuver and an effort to distribute the Saudi over-compliance that has been in place since about April to other OPEC+ members.”

The target will only come into force if all members of OPEC+ implement 100 per cent of their pledged curbs, Novak said in a Bloomberg TV interview on Thursday. That’s something the alliance has struggled to achieve throughout the three years of its existence, with some countries such as Iraq actually increasing output after promising to cut.

Some countries that have failed to make their pledged cuts may have to reduce their current output under the adjusted agreement. The new target for Iraq was a particular sticking point during the six hours of talks on Thursday, delegates said.

“The ruckus reflects pushback by producers facing stronger pressure than in the past to comply and contribute real, voluntary cuts,” said McNally. “Nobody said collective supply management was easy or fun, especially after four years of struggle against surpluses.”

For Russia, which has achieved its targeted cuts in just three months this year, full compliance got easier on Thursday as OPEC agreed to exclude a very light oil called condensate from the country’s quota. Novak had argued that a recent increase in production of that hydrocarbon, which is extracted from natural gas fields, was the only reason Russia was falling short of its pledge.

The new 500,000 barrel-a-day quota reduction will only apply in the first quarter of 2020, said Novak. The group will hold an extraordinary meeting in March to discuss what to do next, said a delegate.

Those talks could coincide with a tricky patch for the oil market. Demand growth is slowing and another big expansion in rival production is coming down the pipeline. Together those factors could create another oversupply that drives international prices back down toward US$50 a barrel.

That’s too low for most OPEC members to balance their budgets, and would make an unfortunate epilogue for the record-breaking initial public offering of Saudi Arabia’s state oil company, which set the final price of its shares on Thursday.