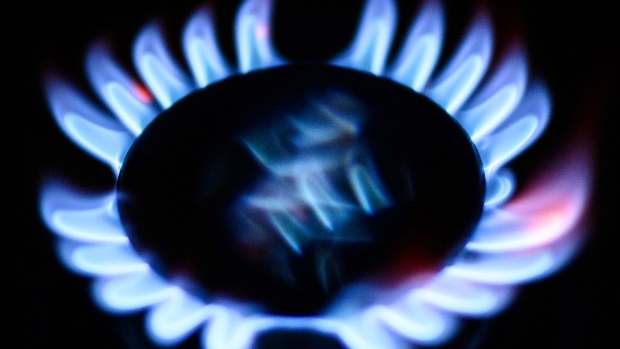 LONDON, UNITED KINGDOM - SEPTEMBER 20: A gas flame is seen on a domestic cooker on September 20, 2021 in London, England. Rising prices of natural gas in the UK have pushed several energy suppliers out of business this year, with other industries warning of knock-on effects, such as the production of carbon dioxide, which is widely used by the food and drink industry. (Photo by Leon Neal/Getty Images) , Photographer: Leon Neal/Getty Images Europe

(Bloomberg) -- The world’s biggest gas traders and producers are meeting in Dubai this week for the Gastech conference -- the first major in-person event for the industry since the onset of the coronavirus pandemic.

The conference, running from Sept. 21-23, is happening just as Europe faces a gas crunch, with prices spiking to record levels and analysts warning that some countries could face blackouts when winter sets in.

Here are the latest developments.

“There is huge demand and we basically have a set capacity,” Qatar’s energy minister, Saad Al-Kaabi, said. The country is the world’s biggest exporter of liquefied natural gas and is investing billions of dollars to increase production, though the project will take years.

“They are queuing up for LNG. We have huge demand from all our customers and unfortunately we can’t cater for everyone.”

LNG prices in Asia have spiked almost 50% this month to $27.19 per million British thermal units.

“We don’t want these high prices, we don’t think its good for consumer,” he said.

Indonesia to Ramp Up Renewables (11:05am UAE)

Indonesia plans to increase its mix of power generation from renewable energy to 70% by 2040, Energy Minister Arifin Tasrif said. Demand for gas will increase as the world transitions from diesel and coal, he said.

OPEC Secretary-General Mohammad Barkindo said Europe’s gas crunch underscored that more investment in fossil fuels is needed. Governments must realize the switch to cleaner forms of energy can only happen slowly, he said.

“Emotions have overtaken industry facts,” he said on a panel with energy ministers from Qatar and the UAE. “How do we change this narrative, because we’re losing it? Civil society and climate activists have taken over the space. Activist shareholders have held the industry nearly to ransom.”

The energy ministers of Qatar, the world’s biggest exporter of LNG, and the UAE echoed those sentiments.

“There’s a euphoria around the energy transition that’s forcing companies not to invest,” Qatar’s Saad Al-Kaabi said. “People should not forget that new investments are needed to just keep output sustained. People are now realizing there’s a supply crunch and we haven’t even got into the winter season yet.”