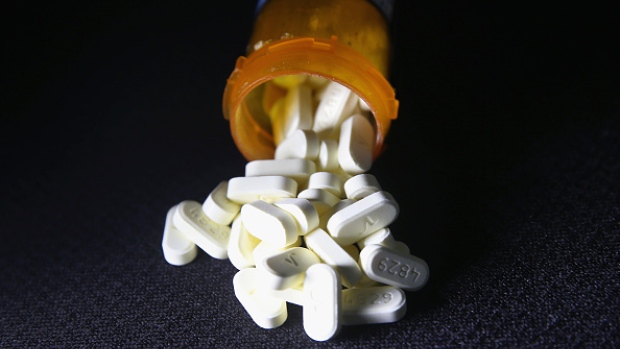 NORWICH, CT - MARCH 23: Oxycodone pain pills prescribed for a patient with chronic pain lie on display on March 23, 2016 in Norwich, CT. Communities nationwide are struggling with the unprecidented opioid pain pill and heroin addiction epidemic. On March 15, the U.S. Centers for Disease Control (CDC), announced guidelines for doctors to reduce the amount of opioid painkillers prescribed, in an effort to curb the epidemic. The CDC estimates that most new heroin addicts first became hooked on prescription pain medication before graduating to heroin, which is stronger and cheaper. (Photo by John Moore/Getty Images) , Photographer: John Moore/Getty Images North America

(Bloomberg) -- More than 1,500 U.S. municipalities want to be able to negotiate as a group with Johnson & Johnson, Purdue Pharma LP and other drug makers over the opioid epidemic, hoping that will spur the drugmakers to pay billions of dollars to settle individual lawsuits.

The cities and counties, who blame the drugmakers and distributors for creating a national public-health crisis by illegally promoting opioids, asked U.S. District Judge Dan Polster in Cleveland Friday to let them create a negotiation class. The suits were already consolidated for pre-trial exchanges of information.

“This is not a litigation class,” the group wrote. “It does not affect the prosecution of existing actions filed against opioid manufacturers, opioid distributors or pharmacies.”

Settlement talks between J&J and Purdue, along with drug distributors such as McKesson Corp. and Cardinal Health Inc., and states and local governments who have their cases before Posner have been dragging, as it appears the companies are prepared to take their chances in court.

J&J is currently trying to fend off Oklahoma’s $13 billion lawsuit before a judge in Norman. It’s the first trial where a state seeks to force a drug maker to cover the cost of the fall-out from opioid-related overdoses and addictions.

In Cleveland, the judge has pushed both sides hard to settle.

“It is no secret that there have been settlement discussions right from the onset,’’ Rice and other plaintiffs’ lawyers said in court filings. The talks are ongoing, according to the filing.

Allowing the plaintiffs to come together for negotiation purposes offers “the perfect mechanism for allowing the affected cities and counties to negotiate credibly and effectively as a group,’’ the lawyers said.

To contact the reporter on this story: Jef Feeley in Wilmington, Delaware at jfeeley@bloomberg.net

To contact the editors responsible for this story: David Glovin at dglovin@bloomberg.net, Joe Schneider, Steve Stroth