Orange juice futures are heading for the longest winning streak in more than 30 years with frost threatening groves in Florida, the top supplier.

“The entire citrus country will be at risk of frost” this weekend, according to World Weather Inc. President Drew Lerner. At the moment, readings are expected between the upper 20 and low 30-degrees Fahrenheit. Trees must be exposed to temperatures near 28 degrees or below for four hours or more to cause major damage. Northern fringes of the citrus belt will be the coldest said Donald Keeney, meteorologist with Maxar Technologies Inc.

The most-active March contract jumped as much as 3 per cent to US$1.6445 a pound in New York. It’s up 4.2 per cent this week. If prices hold, this will be an eighth straight weekly gain, the longest since November 1991. 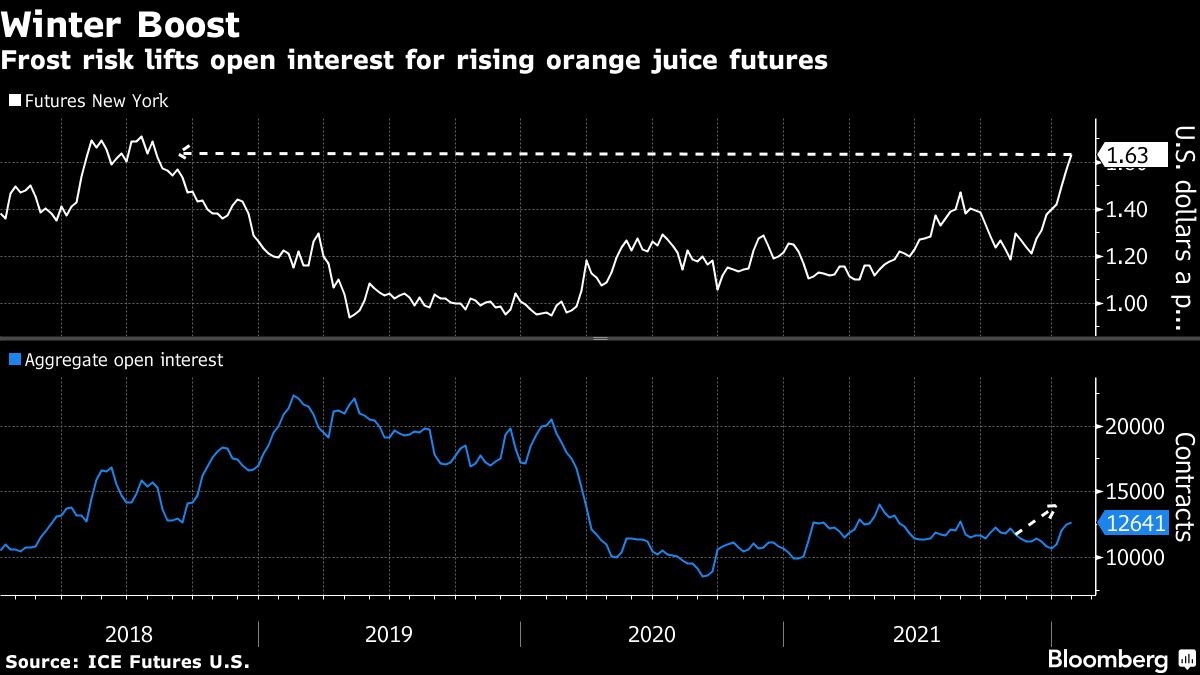 Stockpiles have plunged and output is down in other key producing areas besides Florida. California, which produces mostly for the fresh fruit market is also expected to see a decline this season, as is third-ranked Texas. Overall, U.S. orange production will fall 11 per cent from a year earlier, and 25 per cent from two years ago.

The U.S. can’t much look to imports to bolster supplies, because surging transportation costs have made them so expensive to ship from countries like top citrus producer Brazil.

There’s a chance the frost won’t materialize for Florida’s groves. The risk is low and about half of the state’s total crop has already been harvested, so any losses, if at all, would be small, said Judy Ganes, president of J. Ganes Consulting. The biggest risk would be to early buds for next year’s crop.

Orange juice demand has risen in the pandemic partly because it is seen as boosting the immune system. However, if there isn’t enough supply, consumers will simply take vitamin C, or get vaccines instead, she said.

“The market is getting ahead of itself,” Ganes said of the rally.

In other soft commodities, cocoa, cotton, raw sugar and arabica coffee slid, partly under pressure from the surging U.S. dollar that’s eroding the appeal of commodities priced in the greenback. The American currency climbed to a new 2022 high as Federal Reserve Chair Jerome Powell signaled that the central bank will embark on a rate-hike cycle starting in March.