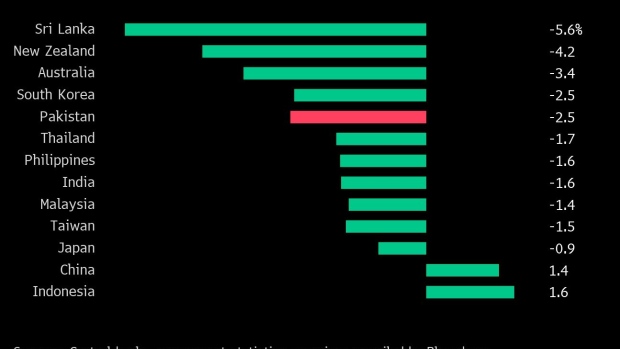 Reza Baqir, governor of the State Bank of Pakistan, poses for a photograph in Karachi, Pakistan, on Wednesday, Dec. 4, 2019. Pakistan's central bank wants to boost exports to help end a chronic boom-and-bust cycle now that the economy is showing signs of stability. , Bloomberg

“We feel that is no longer necessary and real interest rates are appropriate,” Baqir said in an interview to Bloomberg Television’s Rishaad Salamat and Haslinda Amin, referring to the government’s move to broaden its tax base and lower the budget deficit. “Because fiscal policy is helping monetary policy, it allows us to continue the pause and have to do less on real interest rates.”

Pakistan’s current real interest rates are in negative territory following a spike in retail inflation to 12.3% in December. While the central bank has increased rates by 275 basis points since September, Baqir said more increases aren’t needed at the moment given the good coordination between fiscal and monetary policies.

The nation’s parliament approved a tax bill this month that will raise 343 billion rupees ($1.95 billion) in taxes, according to Finance Minister Shaukat Tarin. The measure, along with the approval of another move to increase central bank’s independence, are preconditions for reviving an International Monetary Fund loan program.

“Such fiscal and monetary coordination for emerging markets is very important for both managing inflation expectations as well as to keep a good outlook for growth,” Baqir said.

The State Bank of Pakistan on Monday kept its key target rate unchanged at 9.75% to support growth momentum, while waiting for past increases in borrowings costs to temper domestic demand and cool inflation.

The central bank expects inflation to average between 9%-11% in the year to June, and move toward its target of 5%-7% next year. It sees gross domestic product growth easing to 4.5% this fiscal year from close to 5% seen previously.