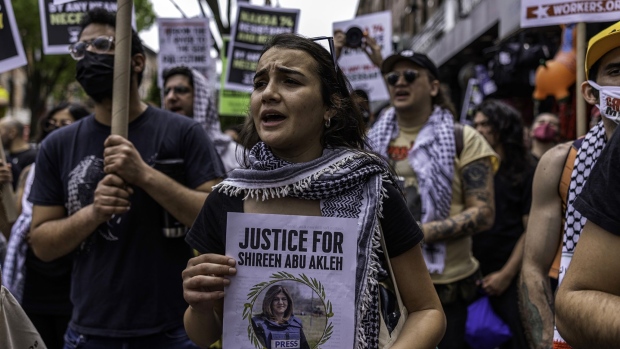 (Bloomberg) -- The Palestinian Authority rejected the inconclusive findings of a US investigation into the killing of Palestinian-American reporter Shireen Abu Akleh.

The US Statement Department said Monday an American investigation had found the bullet that killed the Al Jazeera television journalist was too badly damaged to offer a definitive conclusion as to who was responsible for her death.

Abu Akleh was shot dead while reporting on an Israeli military operation in the West Bank town of Jenin in May. The Palestinian Authority said Israel killed Abu Akleh. Israel has said Palestinian militants may have been responsible for her death.

The Palestinian Authority released the bullet that killed her last week to Michael Fenzel, the US Security Coordinator responsible for Israel and the Palestinian authority, for investigation.

Gunfire from Israeli army positions was  “likely responsible” for Abu Akleh’s death, the US statement said, but the investigators weren’t able to “reach a definitive conclusion regarding the origin of the bullet.”

The US State Department said it found no reason to believe the killing was intentional, “but rather the result of tragic circumstances.”