Shares of PayPal Holdings Inc. slipped as much as 2 per cent on Wednesday as the payments company prepared to give an update to shareholders and analysts at its investor day.

Analysts expect PayPal’s bid for more growth -- particularly through its ground-breaking move into cryptocurrency -- will be a key focus at the event on Thursday. Shares have soared 135 per cent in the past year, propelled by a shift to digital commerce amid the pandemic. Its market value of about US$331 billion exceeds most large banks, including Bank of America Corp., Citigroup Inc. and Wells Fargo & Co., and almost matches Mastercard Inc.’s of US$332 billion.

The stock touched an all-time high on Feb. 9 as Bitcoin blew past another record. Shares also rose after better-than-expected earnings last week.

PayPal will probably “profit handsomely from onboarding crypto,” Bloomberg Intelligence commodity strategist Mike McGlone said in an email. “They are selling shovels to the traders per charging for every transaction after the initial for-free period,” he said, referring to Gold Rush sales to prospectors. 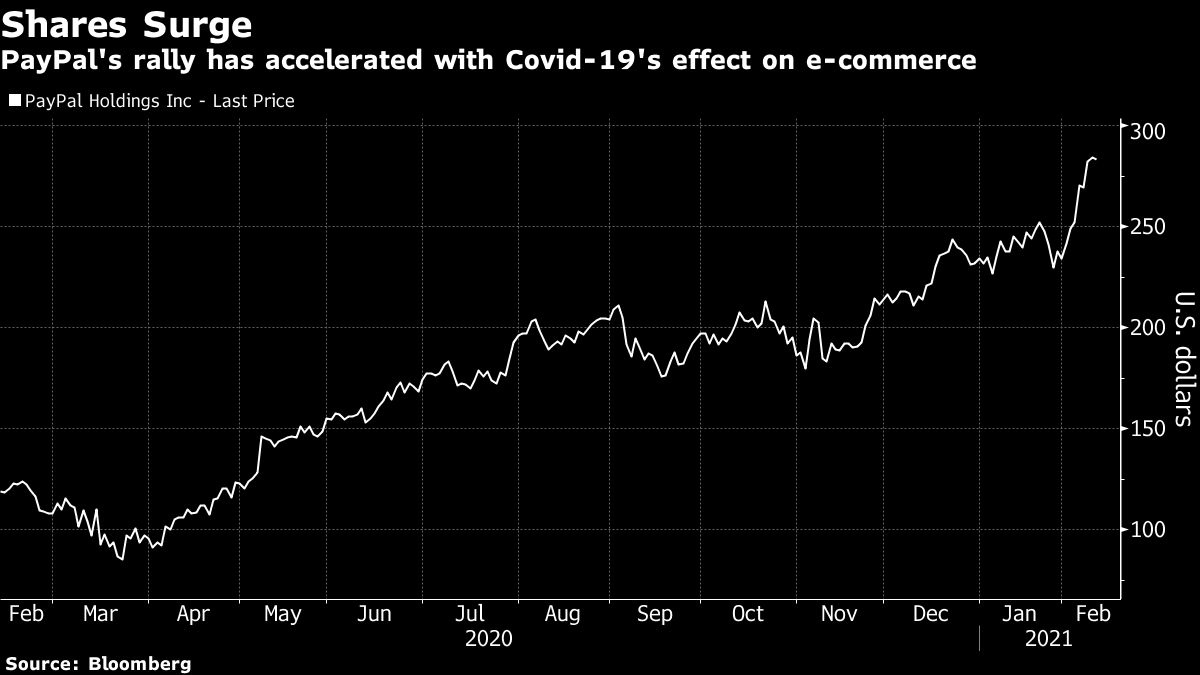 “Crypto is certainly top of mind with investors right now,” Guggenheim analyst Jeff Cantwell said in an email. Investors should expect to hear about its plans for merchants and customers as it’s taking a leadership position with crypto, he said.

The company may demonstrate new versions of PayPal and Venmo wallets that are rolling out in the second quarter, according to MoffettNathanson analyst Lisa Ellis.

Executives may also explain how they view the relationship between user growth, engagement growth and average revenue per user, or ARPU, growth, she said, also in an email. “PayPal may even give directional targets for how they expect to [grow] each of these metrics over time,‘’ she said.

Both Ellis and Keefe, Bruyette & Woods analyst Sanjay Sakhrani see PayPal raising its medium-term targets. Ellis expects a revenue growth forecast in the high-teens to around 20 per cent, with earnings-per-share growth of about 22-per-cent-to-25-per-cent.

Sakhrani expects higher targets as growth is set to pick up, with a structural shift toward greater e-commerce adoption, along with growth-boosting initiatives including crypto, Venmo and buy-now-pay-later installment plans.

“Although investor expectations are high into the event, we believe that the company’s ability to compound earnings growth at 20 per cent+ levels could still yield attractive returns and the growing user base and product roadmap could set them up for further upside,” Sakhrani said.

He also expects comments on PayPal’s strategy for continuing to build on rapid growth in net new active accounts and more engagement among broader cohorts of users. Moves into cryptocurrency trading and other areas, like credit cards, offer users more “touchpoints and utility,” Sakhrani noted.

It’s not clear that users will take advantage of PayPal allowing them to fund purchases with Bitcoin, particularly as merchants that accept the digital currency see few transactions, Morgan Stanley analysts James Faucette and Betsy Graseck wrote in a Wednesday note on digital currencies. Volatility and possible tax issues may be key deterrents, they said.

PayPal is providing crypto as part of a strategy of offering as many fintech services as possible to its 325 million active users, they said. That may not contribute much to profits this year or next, Faucette and Graseck said, calling it “more of an engagement tool.”