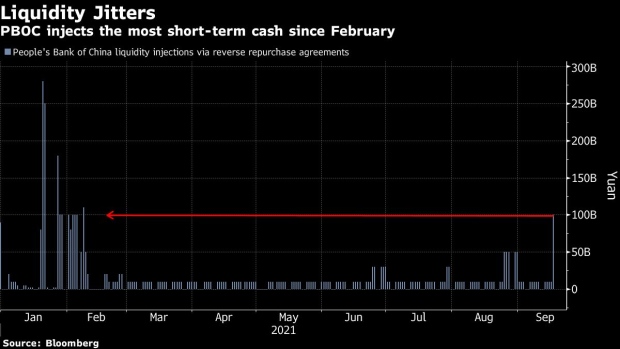 (Bloomberg) -- China boosted the injection of short-term cash into the financial system in a sign that it’s seeking to soothe market nerves frayed by concern over quarter-end funding needs and China Evergrande Group’s debt crisis.

The People’s Bank of China injected 90 billion yuan ($13.9 billion) of funds on a net basis via seven-day and 14-day reverse repurchase agreements on Friday, the most since February. That was the first time this month that the authorities added more than 10 billion yuan of short-term liquidity into the banking system in a day.

The operation comes as crisis facing Evergrande fuels concern over the health of the nation’s real estate and credit markets. Adding to the stress is a seasonal spike in demand for cash, as banks become less willing to lend toward quarter-end as they prepare for regulatory checks. Liquidity also tends to tighten before a one-week holiday in China at the start of October.

“It’s fair to say that the Evergrande situation and its repercussions on the broader property market will have a far greater direct impact on Chinese growth than any of the other regulatory crackdowns,” said Alvin Tan, head of Asia foreign-exchange strategy at Royal Bank of Canada. “I would not be surprised that the PBOC is acting to contain the fallout in the money markets.”

The PBOC’s operations have yet to push money market rates lower. The seven-day repo rate, an indicator for interbank borrowing costs, jumped 12 basis points to 2.39%, the highest level since July.