Peloton Interactive Inc. and Zoom Video Communications Inc., perhaps the two stocks most associated with COVID-era gains, now are trading below where they were before the pandemic upended life around the globe.

Both the fitness subscription company and the video-conferencing software firm have slumped throughout 2022, building on losses from 2021 that came as the so-called stay-at-home trade began to unwind. Disappointing quarterly results from both last week underscored the difficulty they’re having in holding on to the robust demand they saw as millions worked -- and worked out -- from home.

Shares of Peloton are up 1 per cent on Monday, while Zoom is up 0.7 per cent. 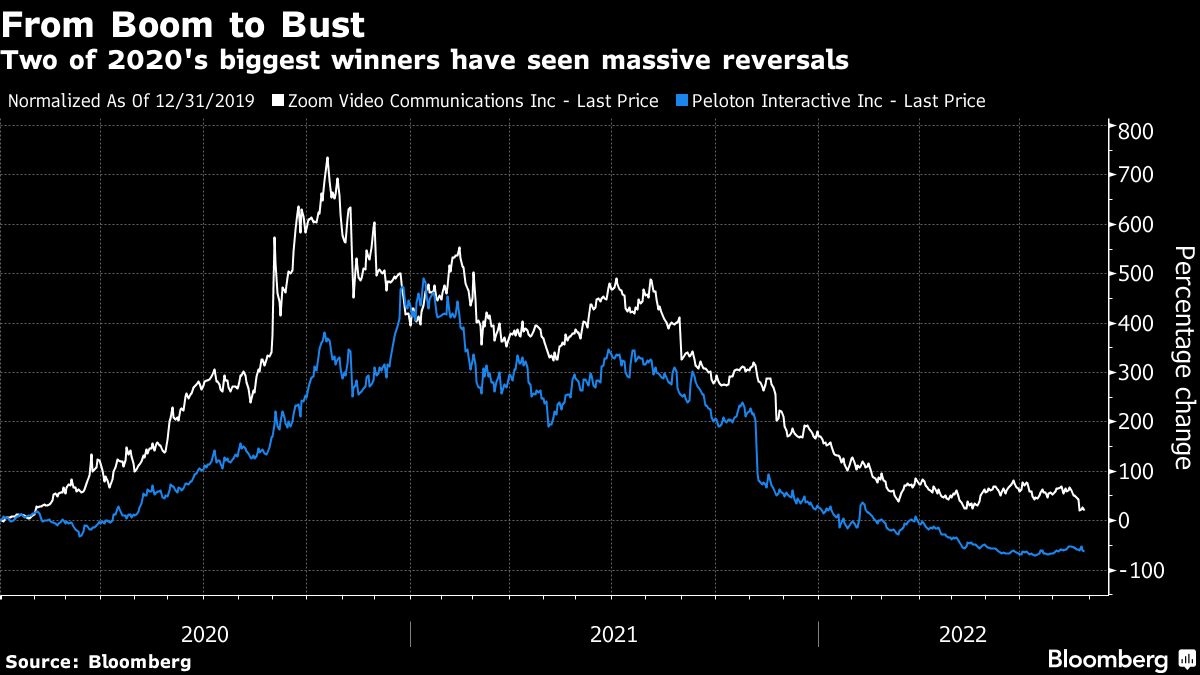 Zoom has plunged 86 per cent from its October 2020 peak and is one of the 10 biggest percentage decliners in the Nasdaq 100 Index this year. Peloton has collapsed more than 90 per cent from its record January 2021 record, touching an all-time closing low last month. Bears say there’s no sign that the stocks will recover any time soon, given that analysts are still hacking away at their revenue estimates.

“Both went crazy during the stay-at-home era because demand went off the charts, and the combination of hype and day traders bidding them up turned them into a bubble,” said Jordan Kahn, chief investment officer of ACM Funds.

The two are hardly the only COVID stocks that have seen sharp reversals from their pandemic-era heydays. Netflix Inc. and DocuSign Inc. are the two biggest Nasdaq 100 losers of the year, declining in the wake of disappointing results.

In addition to the demand headwinds such companies have seen as customers return to offices and gyms, they are also facing an economic backdrop that has turned against stocks with their financial profiles.

Aggressive moves by the Federal Reserve to combat inflation have led investors to seek out companies with consistent growth or which pay dividends, and away from companies that aren’t profitable or where fast growth rates are cooling off. Last week, Fed Chair Jerome Powell indicated the US central bank was likely to keep raising interest rates.

In another headwind to the valuation of growth stocks, the yield on the 10-year US Treasury note is above 3 per cent, roughly double where it was at the start of the year.

“So much is predicated on the Fed and inflation, and in general this is an environment that is more focused on value and quality, and less hospitable to former high-flyers,” said Quincy Krosby, chief equity strategist at LPL Financial. “It looks like the market has abandoned the COVID trades, but the ones with good fundamentals should eventually find a bottom.”

Those fundamentals remain in question, especially for Peloton, which on Thursday reported a quarterly loss that widened sharply from the prior year, while it also gave a revenue forecast that was well below the analyst consensus. MKM Partners warned of “existential issues ahead,” and the stock fell 18 per cent after the report, erasing a gain earlier in the week, when it agreed to offer bikes and accessories on Amazon.com Inc.

Zoom last week posted its slowest revenue growth on record and cut its full-year sales view, as it didn’t add as many enterprise customers as had been expected. However, the company is profitable and expected to continue growing, factors that Kahn says separate it from Peloton.

“While it got way ahead of itself, Zoom continues to gain traction and it is something I’ll continue to consider as an investment,” he said in a phone interview. “Peloton, on the other hand, seems like a terminal short. It’s projected to lose money for the foreseeable future, and I just don’t know how you determine a floor for that.” 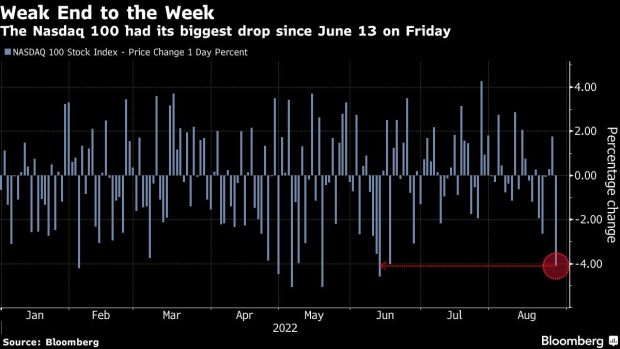 The Nasdaq 100 Index fell 4.1 per cent on Friday, its biggest drop since June 13. The weakness followed comments by Fed Chair Powell, who indicated that the central bank would not soon reverse course in its work to combat inflation. With the drop, the tech-heavy index ended at its lowest since July 27.