Peloton Interactive Inc. climbed to near all-time highs after Evercore ISI analysts said that gym goers are unlikely to return to in-person fitness routines once economies begin to open.

Shares of the interactive exercise company have rallied 71 per cent this year and are up 170 per cent from their March lows as nationwide stay-at-home orders forced people to alter their work-out routines. In May, the company reported third-quarter revenue jumped 66 per cent and raised its outlook for full-year sales and connected-fitness subscribers.

Early digital data from states including Texas, Georgia, Florida and Ohio that have begun to reopen gyms suggests people remain reluctant to return, even when they are allowed to, according to analysts led by Lee Horowitz. In states where gyms have opened, total unique desktop visits for popular boutique fitness studios such as Barry’s Bootcamp and SoulCycle are down 20 per cent to 50 per cent from pre-COVID-19 levels, they said.

Shares of Peloton rose as much as 7.3 per cent to US$49.20 Tuesday in New York. In mid-May, the stock touched US$49.68, the highest since the company went public in September. 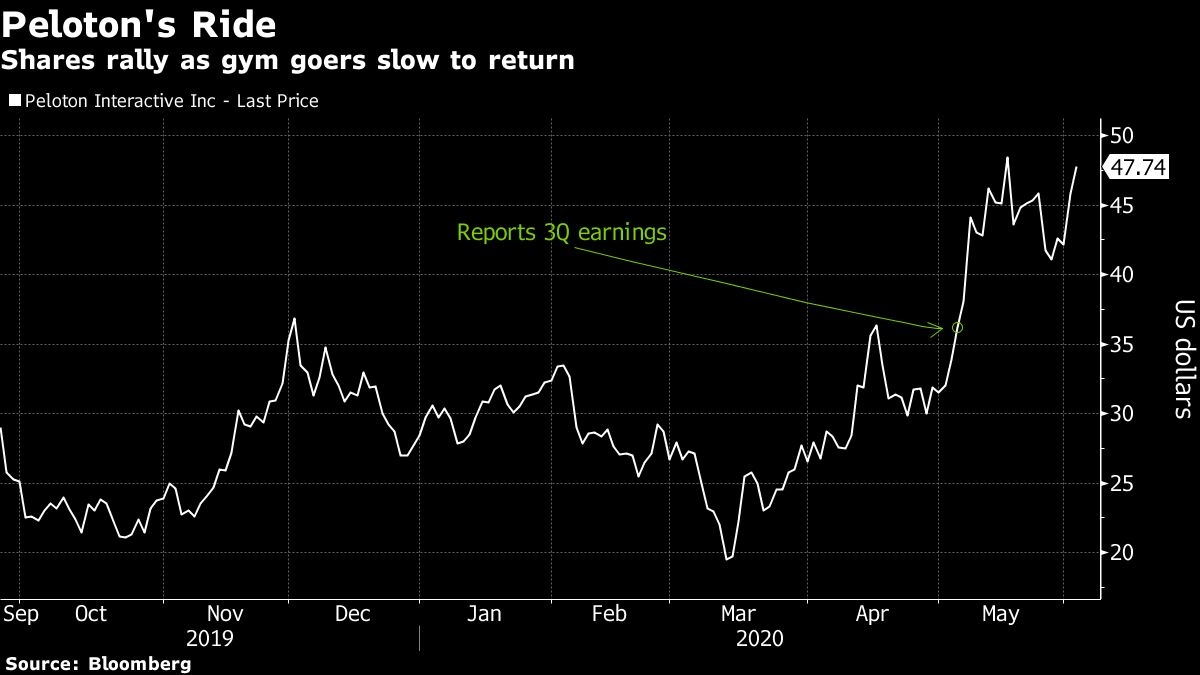 Peloton has been been able to capitalize on its unique position and recently hosted an All-Star Ride with professional athletes such as golfer Rory McIlroy and Minnesota Vikings tight end Kyle Rudolph to engage customers.

Additionally, Peloton CEO John Foley recently said that bringing the price of its bike down is a big focus for the company in the coming years. Affordability presents an opportunity for Peloton to grow its scale, which should accelerate the mix shift of revenue and profit toward subscription, Rosenblatt analyst Bernie McTernan wrote last month.

--With assistance from Joshua Fineman.