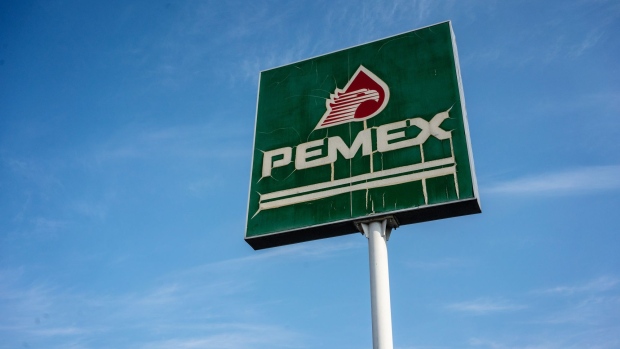 Signage is displayed outside a Petroleos Mexicanos (Pemex) gas station in Tepic, Nayarit state, Mexico, on Wednesday, April 22, 2020. Pemex has too much gasoline and nowhere to store it, potentially racking up significant ship fees as demand wanes because of the fast-spreading coronavirus. Photographer Cesar Rodriguez/Bloomberg Photographer: Cesar Rodriguez/Bloomberg , Bloomberg

(Bloomberg) -- Petroleos Mexicanos saw profits rise to $6 billion, the highest in at least 18 years, as the company benefited from the oil price rally and stabilizing crude output.

Pemex, as the state-run company is known, reported a first-quarter gain of 122.7 billion pesos ($6 billion), the highest since at least the first quarter of 2004, when Bloomberg began collecting the data. That compares to a loss of 37.3 billion pesos the same time a year ago, while Pemex reported a revised net loss of 194.5 billion pesos in the fourth quarter.

First-quarter oil and condensate output rose by 0.23% compared to the previous quarter, to 1.755 million barrels a day, due to increased extraction in shallow-water and onshore fields. Output compared to the same period a year ago rose 2.3%.

While Pemex has benefited from rallying energy prices, Mexico’s gains have been offset by the increased cost of imported fuel, which the government is subsidizing to avoid higher prices for consumers.

President Andres Manuel Lopez Obrador is seeking to make Mexico self-sufficient in gasoline and diesel by having Pemex increase its crude processing to sell fuel domestically. To ensure the country has enough crude to make fuel, Mexico plans to halt exports over time.

In April, Finance Minister Rogelio Ramirez de la O told Bloomberg that the government has stopped paying off Pemex’s debt amortizations due to the oil price rally. The company has the highest debt of any oil major and it faces growing expenditure as it incorporates two new plants into the national refining system -- the Dos Bocas refinery in the state of Tabasco and the Deer Park facility in Houston that it purchased from Shell Plc a year ago.

AMLO, as the president is known, has promised to return Pemex to its former glory by reducing the involvement of private companies in Mexico’s oil sector. Since coming into power in late 2018, he’s canceled competitive oil auctions, ended farm-out, or joint-venture opportunities with Pemex and granted the state oil behemoth operatorship of the billion-barrel Zama oil field -- which was discovered in 2017 by a consortium of private companies led by the U.S.’s Talos Energy Inc.

AMLO’s nationalist oil policy has resulted in Pemex taking on the sole financial burden of developing large swathes of Mexico’s oil territory -- an uncommon practice in the oil industry, where the costs and risks are notoriously high. At the same time, Pemex must plough significant resources into its loss-making refineries to meet the government’s energy self-sufficiency goal.