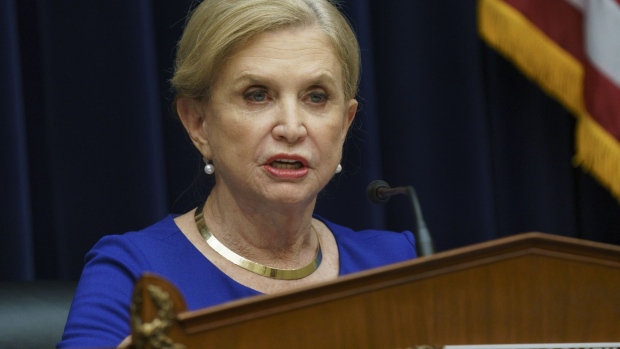 (Bloomberg) -- The Defense Department is requesting refunds from TransDigm Group Inc. for the second time in less than three years after the department’s watchdog said the supplier of specialized spare parts continues to collect excess profits.

An audit by the Pentagon’s inspector general found the company’s excess profit amounted to $20.8 million -- or more than half of $38.3 million it collected on 153 sole-source contracts from 2017 through mid-2019 that the watchdog reviewed. A previous audit issued in 2019 found $16.1 million in excess profit on $29.7 million in contracts from 2015 to 2017, and the company eventually refunded that amount.

The inspector general “found that TransDigm’s business model is specifically designed to raise prices on defense contracts,” House Oversight Committee Chairwoman Carolyn Maloney said ahead of a Wednesday hearing on the topic. The New York Democrat said in a statement that “TransDigm identifies companies with specialized sole-source contracts, buys those companies, and then hikes prices on mission-critical parts. My message to TransDigm today is simple: Pay back the money.”

The amount of money and the parts, produced to meet military specifications by a company that also makes equipment for commercial aircraft, are unremarkable. But the dispute sheds light on the Pentagon’s difficulty in getting a handle on costs, no matter how small, across a budget expected to top $740 billion in the fiscal year ending Sept. 30.

The Defense Logistics Agency is implementing the recommendation of an Inspector General’s audit dated Dec. 13 that the agency request voluntary refunds for “excess profit on repair parts,” according to a statement from the agency, which is the Pentagon’s principal purchaser of parts and commodities. It didn’t say how much it sought in refunds, but an official familiar with the matter said letters were sent to 32 specific TransDigm units requesting all $20.8 million flagged by the inspector general.

Asked for comment on the refund request, TransDigm spokeswoman Jaimie Stemen cited a statement the company issued last month saying it provided “full access and cooperation to the IG to help promote a complete and accurate assessment of the company and the value the company provides.”

She said the audit “ignores significant real costs incurred by the business and, contrary to law, reports these costs as excess profit. The report presents profit percentages in a misleading and provocative manner. This includes computing profit as a percentage of cost rather than as a percentage of revenue -- the internationally recognized method and business standard,” it said.

About 43% of Cleveland-based TransDigm’s sales are to the U.S. and international militaries. It emerged in recent years as a key sole-source provider of spare parts for Pentagon airplanes and helicopters, including the AH-64 Apache, F-16 Fighting Falcon and CH-47 Chinook. From Oct. 1, 2014 through April 11, 2019, the Defense Department executed 4,697 contract actions with TransDigm and its subsidiaries valued at $634.7 million.

The inspector general’s audit redacted specific cost data associated with individual parts that experienced price increases after TransDigm acquired the original manufacturer, such as a battery charger that increased in price 60% over one year. Some parts increased by as much as 247% from the last Pentagon purchase from the original manufacturer to the first sale after its acquisition by TransDigm.

The Pentagon has tried several initiatives to stem the pricing problems outlined in the reports, including two legislative proposals that didn’t become law, an initiative to reverse-engineer TransDigm parts so other companies can use the blueprints and a “strategic supplier initiative” to expand its parts suppliers, according to Deputy Inspector General Theresa Hull, who has supervised much of the audit work.

“What we wanted to drive home is that these other initiatives are important” and “they are getting at the problem but to really get the DoD contracting community the information they need to make better contract negotiations there needs to be a forceable option -- a legislative change that compels the contractor to actually give the information,” Hull said in an interview last month.

“This isn’t just a TransDigm issue. This is a systemic issue,” she said, that requires giving government personnel the authority to get detailed cost data on sole-source parts when they need it. “You can’t expect DoD to solve a problem as systemic as this without a bigger solution.”