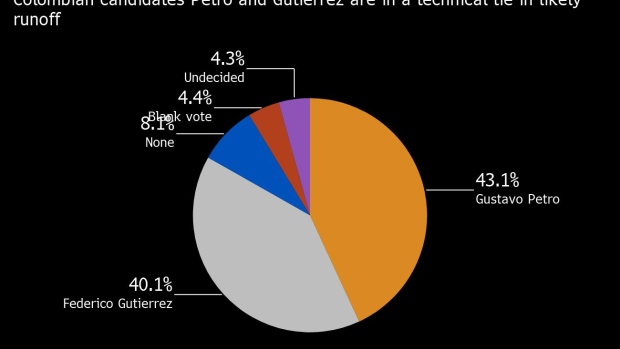 The stage for a press conference announcing a vice presidential pick in Bogota, Colombia, on Wednesday, March 23, 2022. Colombian presidential front-runner Gustavo Petro named an Afro-Colombian environmental activist and lawyer, Francia Marquez, as his running mate ahead of the May 29 election. Photographer: Ivan Valencia/Bloomberg , Bloomberg

(Bloomberg) -- Colombian leftist leader Gustavo Petro no longer enjoys a clear path to victory in the upcoming presidential election, according to a new poll.

The survey, conducted by the National Consulting Center and published by Semana magazine on Saturday, suggests a tightening race between Petro and his main rival, conservative candidate Federico “Fico” Gutierrez.

In the likely scenario that the two face each other in a runoff, Petro would receive 43.1% of votes, while Gutierrez would get 40.1%, -- just within the poll’s margin of error of plus or minus 1.5 percentage point. Previous polls showed Petro easily beating all his main rivals in a second round.

Petro, 61, has called for a new economic model that doesn’t rely on oil and coal. He is popular with young and low-income voters, while many business leaders fear him. Gutierrez, 47-year-old former mayor of Medellin, has vowed to take a tougher stance on security issues.

Colombians vote for president on May 29 with a likely runoff in June.