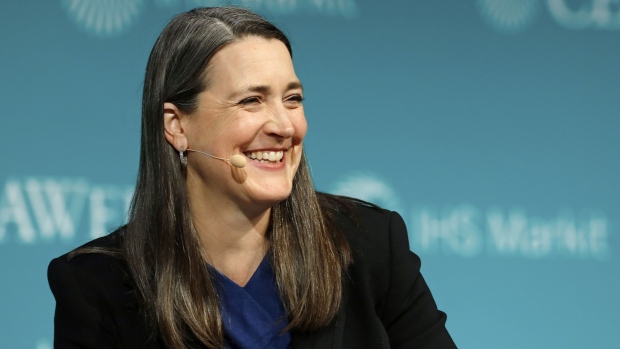 Poppe, who currently runs Michigan-based CMS Energy Corp., will be PG&E’s third CEO in the past two years. She takes over on Jan. 4, replacing interim chief Bill Smith.

PG&E shares surged as much as 7.8 per cent, the most during intraday tradingin five months.

“Patti is an exceptional leader,” PG&E Chairman Robert Flexon said in a statement. “We all recognize that PG&E must continue to improve, adapt, and become more resilient to the changing climate.”

The stakes are high for the century-old utility. It pleaded guilty in June to 84 counts of involuntary manslaughter for its role in starting the Camp Fire, which destroyed the town of Paradise in 2018. Regulators have put in place oversight measures that could include a state takeover if the company causes another catastrophic blaze as drought and extreme weather have made California increasingly prone to wildfires.

The announcement follows a record-breaking fire season. PG&E has cut power multiple times in recent months to large swaths of Northern California to prevent its power lines from sparking more catastrophic blazes. The effort has been mostly successful, although investigators are looking at the company’s equipment as the possible cause of a large fire that killed four people in Shasta County.

Poppe has led CMS since 2016. The company, based west of Detroit, provides electricity and natural gas to 6.7 million people in Michigan. During her tenure, Poppe boosted safety measures and pushed to close coal plants with clean energy, PG&E said in its statement.

Before CMS, Poppe worked for DTE Energy Co. for five years, including as a power plant director. She also worked at General Motors Co. for 15 years.

PG&E, which serves about 16 million people in Northern and Central California, emerged from Chapter 11 in July after settling wildfire claims from individual victims, insurers and public agencies for $25.5 billion. The company’s last permanent CEO, Bill Johnson, retired at the end of June after steering the company through Chapter 11.

The company has replaced 11 of its 14 board members since collapsing into bankruptcy. It also made a number of other concessions in order to win state approval of its reorganization plan, including freezing its dividend for three years and changing its operations to have more of a safety focus.

Poppe has resigned from CMS effective Dec. 1. She will be replaced by Garrick Rochow, executive vice president of operations.