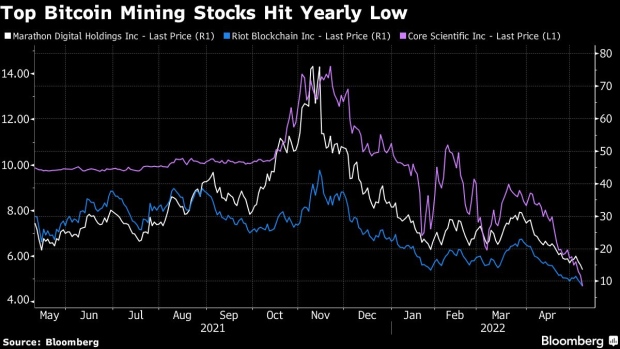 (Bloomberg) -- The plunge in top crypto mining shares deepened Monday as Bitcoin tumbled along with the broader market on fears tightening monetary policy could throw the economy into a recession.

Marathon Digital Holdings, the largest public miner in the U.S. by market value, dropped 15% to $12.78, bringing its year-to-date losses to roughly 60%. Meanwhile, Core Scientific Inc. fell to a new low and Riot Blockchain Inc. declined to the lowest since 2020.

Crypto mining stocks have moved in tandem with the world’s largest cryptocurrency as such companies have large amounts of mined Bitcoin on their balance sheets. Investors, who do not want to directly hold Bitcoin in their portfolio, may choose such stocks as a proxy to bet on Bitcoin prices.

“Crypto and equity markets are largely selling off in tandem due to a broad risk-off environment where many investors are moving to cash,” Steven McClurg, chief investment officer of Valkyrie Investments, said. “The correlation between the two asset classes has grown more pronounced in recent months because the number of publicly traded companies involved in blockchain and digital assets continues to grow, and is not likely to reverse course.”

Bitcoin fell below the key level of $33,000 over the weekend after a selloff in risker asset classes such as technology stocks followed moves by the Federal Reserve to boost interest rates in order to tame decades-high inflation. The tech-heavy Nasdaq 100 is suffering heavy losses, down 25% from a high in November, while the S&P 500 has shed about 14% over the same time period.

Backers often champion Bitcoin as store of value similar to gold that’s uncorrelated with other financial markets. However, the digital currency has been among the most hard-hit asset classes by the risk-off environment.

The losses come after shares of miners spiked late last year, along with Bitcoin, after a ban on crypto mining in China enabled the rest of the world to mine tokens with less competition. However, since then, shares have fallen along with the price of Bitcoin and as margins have deteriorated on higher energy prices stemming from sanctions on Russian energy imports. Shares of other crypto-exposed stocks such as MicroStrategy Inc. and Coinbase Global Inc. have also been in decline.

“In the short term, we believe the markets will continue to sell off through the summer, especially if rate hikes continue through the June and July FOMC meetings, before staging a potential rally through the end of the year in a pattern that has largely established itself over the past decade,” McClurg said. “One thing to watch is the yield curve, as an inversion would be a harbinger of further selloff. Recession is imminent.”