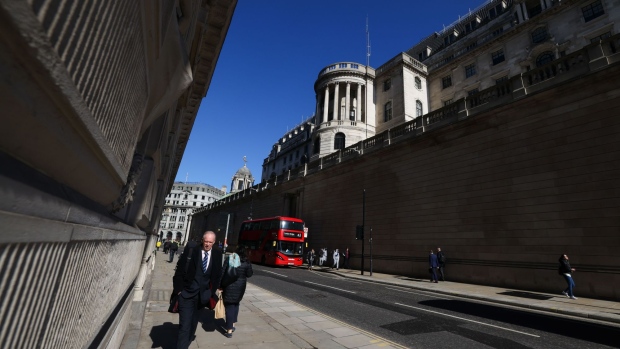 The Bank of England (BOE) in the City of London, U.K., on Thursday, March 17, 2022. The Bank of England, the first among major central banks to tighten monetary policy after the pandemic, looks all but certain to reach another milestone on Thursday by taking interest rates back to their pre-Covid level. , Bloomberg

(Bloomberg) -- The Bank of England’s fight against UK inflation will become more unwinnable if politicians’ attacks on the central bank’s independence undermine its credibility.

That’s according to Citigroup Inc.’s Benjamin Nabarro, who defended the BOE in a note to clients after senior Conservatives criticized the Monetary Police Committee for not doing enough to fight inflation. The Sunday Telegraph reported one senior minister as saying “it has one job -- to keep inflation around 2% -- it’s hard to remember the last time it achieved its target.” Nabarro pointed out that inflation was last below 2% in July.

While the BOE has hiked interest rates at four straight meetings, Chancellor of the Exchequer Rishi Sunak has united think tanks and lobby groups across the political spectrum in arguing that he has not done enough to ease Britain’s cost-of-living crisis, with inflation forecast to hit double digits this year.

Nabarro said deflecting blame at the BOE “could risk the Bank’s authority and position in public life,” with such attacks unprecedented since officials were granted operational independence in 1997.

Governor Andrew Bailey and fellow policymakers Dave Ramsden, Michael Saunders and Jonathan Haskel face lawmakers of the Treasury Committee later Monday to defend their strategy. They have argued that if they had acted sooner to tame inflation, it would have increased the risk of a recession, particularly given risks to unemployment after the end of the government’s furlough program.

“The criticism, especially that the Bank could do more here to offset the cost-of-living squeeze, is broadly unfounded,” Nabarro said. “With consumer confidence set to fall to its lowest level on record this week, but inflation to accelerate to its highest level in over 40 years, we see considerable risk the government increasingly apportion blame for recent cost increases onto the Bank, debasing its public standing and credibility.

“Should the Bank’s position become more politically contested, this could prompt wider doubts about the UK’s nominal anchor,” he added. “In a large dual deficit economy, that poses large risks.”