Canadians were given 36 days to decide which national political party could deliver a stronger economy on the other side of the pandemic.

Despite politicians pledging billions to that cause, some experts believe most of the proposed spending measures are short-sighted - leaving Canada's economic prosperity on the line.

"The parties are missing the point," said Don Drummond, a fellow at Queen's University and former chief economist at Toronto-Dominion Bank, who has also held numerous roles in the federal finance department.

Drummond has spent almost 40 years crafting and analyzing policies to create lasting economic growth, and he doesn't believe the three major national parties have laid out sensible plans for the future.

Over the span of the next five years, the Liberals have pledged $78 billion in new spending, the Conservatives have committed to $51.3 billion, and the NDP has earmarked $214.5 billion to rebuild Canada's economy.

Drummond said the Conservative platform stands out to him as it proposes a balanced budget within the next 10 years through growth, without spending cuts. Although, he did express concern that the party’s strategy is banking on growth assumptions.

“You shouldn’t just hope for or assume strong growth because it takes hard work and collaboration to produce results,” he stated.

He also pointed to a cautionary example from the Liberal party's 2021 spring budget where they anticipate that future growth will come from technology including artificial intelligence.

"We've been stuck at the same productivity growth for the last 20 years, and that's despite a lot of technological advancements," he added.

One area that he believes the parties have overlooked during this campaign was tax reform. That's despite the Conservatives suggesting a panel review of the tax system.

In addition to revving the economy, Canada’s next federal government will be expected to manage the rising cost of living as inflation for the month of August came in at 4.1 per cent on a year-over-year basis— the highest it's been in nearly two decades.

The country’s central bank continues to reassure Canadians and investors that it expects this spike in inflation to be temporary. 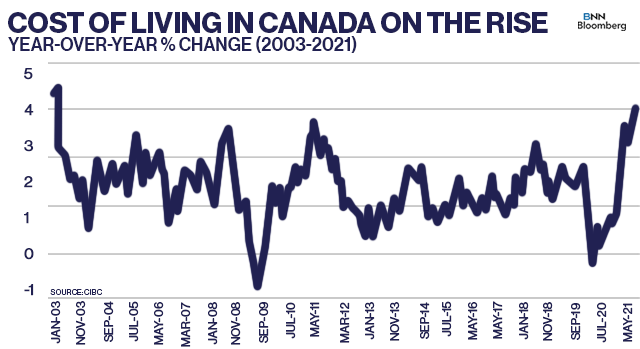 Institutional investor Mark Wiseman isn’t convinced that the parties are up to this task.

"You can't say you're not going to retire the debt, but rather grow out of it, without telling us how," he said in an interview.

Wiseman, the chair of the Alberta Investment Management Corporation and former CEO of the Canada Pension Plan Investment Board, is demanding more from Canadian politicians.

"In terms of the economy and finance, I'm referring to this as the ‘Seinfeld’ election - it's an election about nothing," he said.

He said he wants to see a genuine national plan to invest in human capital which includes re-skilling, increased education, and accelerating immigration to bolster the labour force.

As of now, the Liberals have proposed raising corporate taxes by three per cent on profits beyond $1 billion from Canadian banks and insurers.

The NDP put forward a temporary 15 per cent tax on big corporations, which brought in large profits throughout the pandemic, alongside a three per cent hike to the corporate tax rate, bringing it to 18 per cent.

Instead, Lovely said the government should give businesses incentives to invest and encourage new hires, while keeping Canada fiscally sustainable and competitive internationally.

William White, the famed Canadian economist who predicted the 2008-2009 financial crisis and who also served as the deputy governor of the Bank of Canada echoed those thoughts.

White suggested increased investment in both the public and the private sector through deregulation is a promising strategy.

"Ultimately, you can't just run the economy on consumption alone," he said.

He cautions that action will be required as Canada is headed for a likely economic slowdown partly due to de-globalization trends and discouraged workers who might never come back to their jobs.

"We're in a place right now, where quite frankly, we don't want to be," he warned.