All federal parties 'doling out money' in terms of promises, without a framework: Political strategist

Justin Trudeau and his Conservative rival are nearly tied heading into the final weekend of Canada’s election campaign, leaving the prime minister with decent odds of holding on to power.

The incumbent Liberal Party has about 32 per cent support compared to 30 per cent for the Tories under Erin O’Toole, according to the latest daily tracking survey by Nanos Research Group. The left-leaning New Democratic Party is in third at 20 per cent.

Unless those numbers shift significantly, a third term is within reach for Trudeau, who called the Sept. 20 vote in hopes of leveraging his management of the COVID-19 crisis into control of a majority of seats in the House of Commons.

A majority is unlikely after his opponents successfully portrayed the move as an unnecessary power grab. But Trudeau’s campaign appears to have regained momentum in recent days, and a resurgence of a Quebec nationalist party and the rise of a far-right splinter group may help him.

“We expect a Liberal minority at this point,” said Greg Lyle, president of Innovative Research Group, a polling and consultancy firm with offices in Toronto and Vancouver.

Lyle’s survey this week puts Trudeau ahead by five points, but he expects both the Liberals and Conservatives will lose a few seats from their 2019 tally. Trudeau’s biggest mistake, Lyle said, was calling the election in the first place. “That is their fundamental issue.” 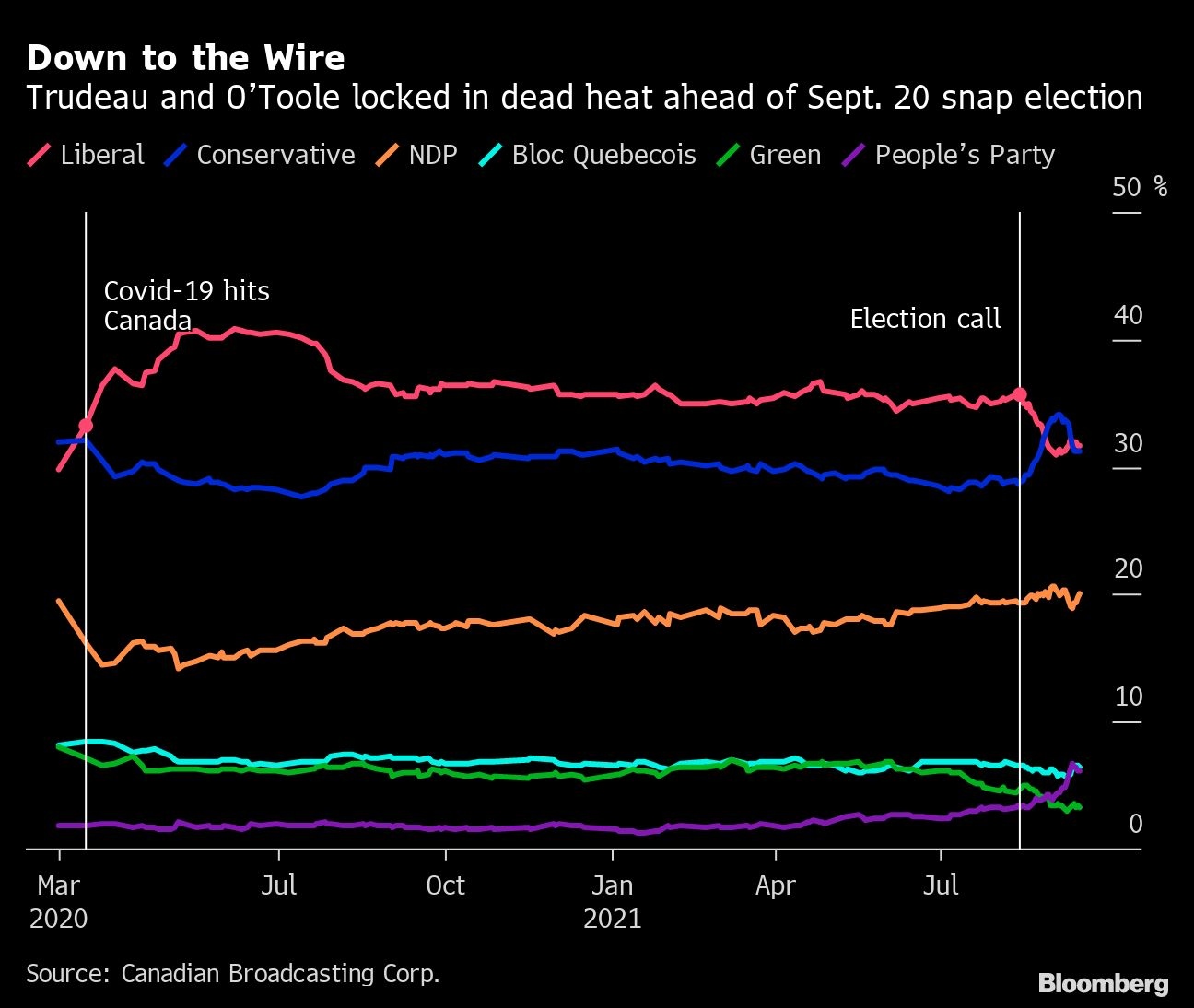 But the pollster argued that O’Toole, who ran a low-key campaign focused on softening the edges of the Conservative Party in hopes of broadening its appeal, had a bigger challenge.

“The Tories are trying to change their brand, to improve it by being seen as center-right as opposed to right,” Lyle said. “They’ve had some success in that but not enough because brands are hard to move.”

O’Toole sprinted out of the gates, releasing a full platform the day after Trudeau asked to dissolve parliament. Heading into the first weekend of September, the Conservatives opened up a lead; Nanos Research founder Nik Nanos described the Tory leader as a “political freight train.”

Having tried to use vaccines as an early wedge issue against the Conservatives, the Liberals then hammered O’Toole on gun control and abortion. They also capitalized on the Tory leader’s promise that, if elected, he’d dial back Trudeau’s ambitious climate targets.

Gains the Conservatives might have realized in Quebec after its popular premier backed O’Toole were thrown into doubt after a televised debate. The moderator asked Bloc Quebecois Leader Yves-Francois Blanchet about laws she said “marginalize religious minorities, anglophones and allophones.” That set off a firestorm in the majority French-speaking province that appears to have helped the separatist party.

The Conservatives “vie for the same voters as the Bloc,” said Sebastien Dallaire, a vice president at polling firm Ipsos in Montreal. “What happened last week gave Blanchet’s campaign a new wind, so that may prevent Conservative momentum.”

Another challenge for the Tories has been a surge in support for the People’s Party of Canada, whose leader, Maxime Bernier, has railed against vaccine mandates and public-health restrictions.

Though it’s never successfully elected a lawmaker, the PPC is now polling above 7 per cent, according the Nanos daily tracking. That’s enough to have the Toronto Sun, a conservative newspaper, warning on its Friday front page that a vote for Bernier risks helping Trudeau secure another term in office.