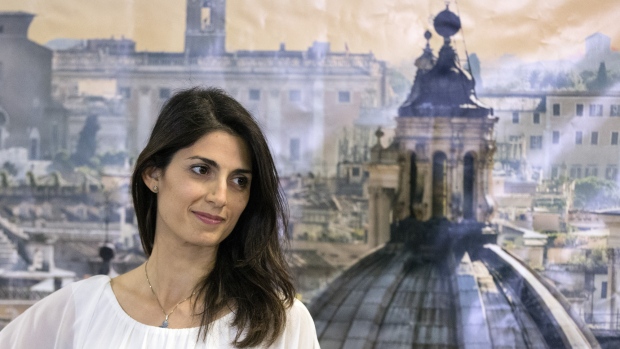 (Bloomberg) -- An acrimonious clash between Italy’s populist allies over alleged corruption has triggered new speculation about early elections, with a senior League government official saying everyone in the party is “sick and tired” of the Five Star Movement.

In one of the worst tussles so far within the ruling coalition, relations descended into mutual backbiting after allegations against the rightist League’s Armando Siri, an economic adviser to Deputy Prime Minister Matteo Salvini, and anti-establishment Five Star’s Virginia Raggi, the mayor of Rome.

Siri, who is undersecretary at the Infrastructure and Transportation Ministry, is suspected by Rome prosecutors of receiving a 30,000-euro ($34,000) bribe for allegedly seeking to favor businessmen in the renewable energy industry. Siri has denied wrongdoing.

Raggi urged the head of the Rome garbage-collection firm to modify its accounts, according to magazine L’Espresso, citing what it said were taped intercepts. Raggi said in a Facebook post that she had exercised no pressure on the official, and that she spoke “harshly” to him “because there is garbage in the streets and I can’t accept it.”

News of the two episodes, which emerged on Thursday, prompted a call by Deputy Premier Luigi Di Maio, of Five Star, for Siri to quit -- and similarly a call by Salvini for Raggi to quit. League officials are angry that Siri’s mandate was swiftly suspended by his minister Danilo Toninelli, of Five Star.

“Salvini isn’t the only one who’s sick and tired of Five Star,” the League’s Edoardo Rixi, deputy minister in the infrastructure ministry, told newspaper La Repubblica on Friday. “We’re all sick and tired.” He added that Five Star is doing “all it can to make us vote in June,” after next month’s European Parliament elections.

Asked whether Salvini plans to ditch Five Star, Rixi said there is no guarantee that trying to force an early election would guarantee a clear parliamentary majority. “We may end up with the same majority as today. It’s not easy. But absurd things are happening,” Rixi said.

Salvini has long resisted pressure from his lieutenants in the League to force an early election, despite opinion polls crediting the party with about 33 percent of the vote, against some 22 percent for Five Star. Salvini believes the League, whose stronghold is in the wealthy north, needs more time to build up support in the south, and is wary of having to rely on his former ally, ex-premier Silvio Berlusconi, for a majority.

Don’t Be Fooled by the Salvini Show, This Populist Has a Plan

Salvini’s long-game strategy is coming under increasing strain as the coalition quarrels -- over a host of issues from tax cuts to immigration, security and relations with China -- as the two allies clash on the campaign trail ahead of the European vote.

“Look, this way we’re not going anywhere. You won’t resolve anything with insults,” newspaper La Repubblica cited Salvini as telling Prime Minister Giuseppe Conte before a cabinet meeting Thursday. “With this attitude you’re blocking the country just for the European elections. So say it, say that you want to blow everything up.”

Salvini’s office did not immediately respond to a request for comment.

To contact the editors responsible for this story: Ben Sills at bsills@bloomberg.net, Richard Bravo, Colin Keatinge