Federal Reserve Chair Jerome Powell backed a quarter-point interest-rate hike this month to commence a series of increases and was open to a larger move if inflation remained too hot, despite uncertainty caused by Russia’s invasion of Ukraine.

“I am inclined to propose and support a 25 basis-point rate hike,” Powell told the House Financial Services Committee Wednesday. “To the extent that inflation comes in higher or is more persistently high than that, then we would be prepared to move more aggressively by raising the federal funds rate by more than 25 basis points at a meeting or meetings.”

Fed officials are pivoting to tackle the fastest inflation in 40 years. While acknowledging the uncertainty posed by the attack on Ukraine, Powell said the need to remove pandemic policy support had not changed. 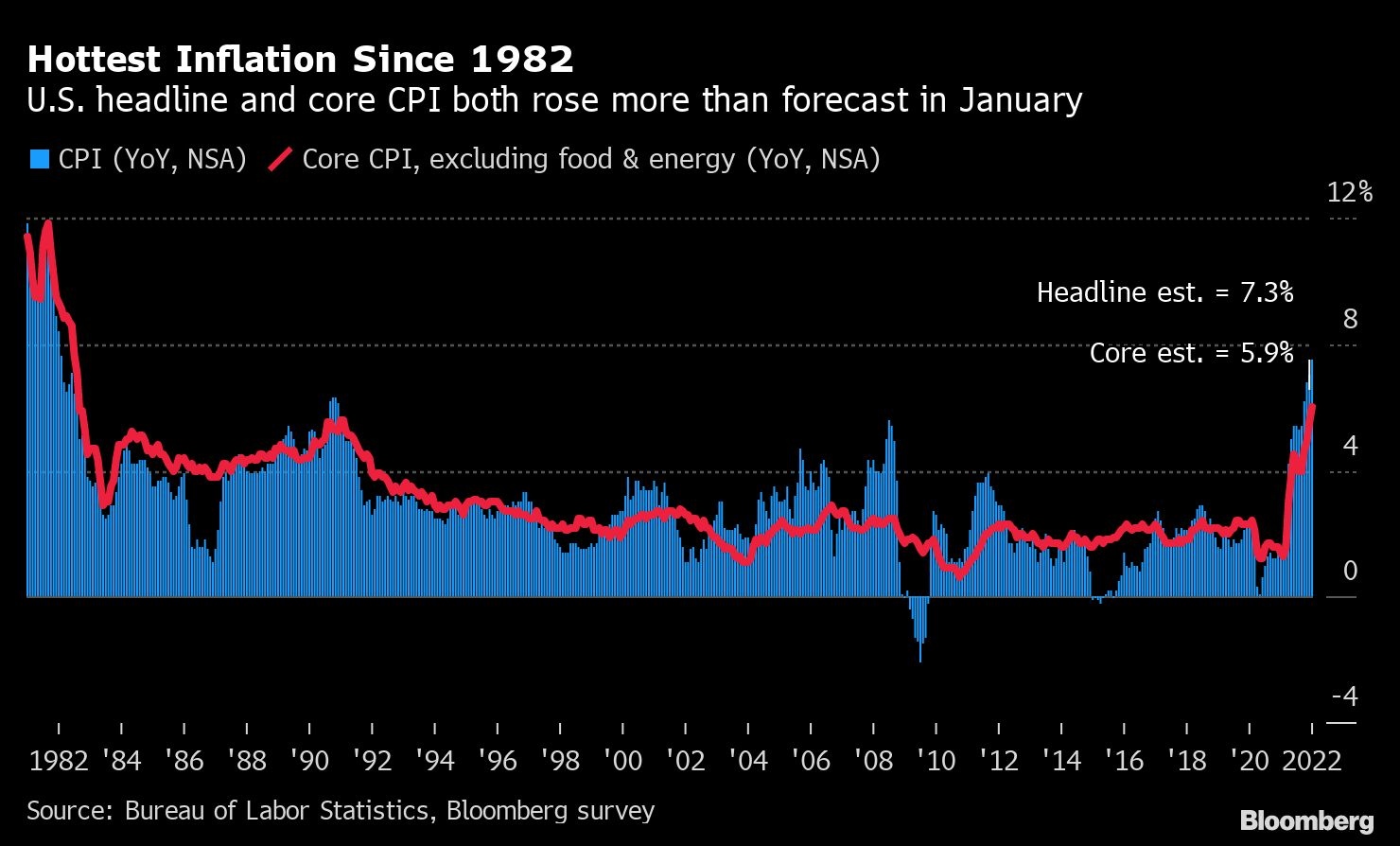 Investors slightly increased their bets on the pace of rate hikes this year as the Fed chief spoke, pricing in about 140 basis points of tightening or slightly more than five quarter-point moves staring this month -- which will mark the first increase since 2018. U.S. stocks advanced and 10-year Treasury yields rose.

Powell said the labor market is “extremely tight,” essentially a message to lawmakers that the central bank has met its maximum employment goal in current conditions, which opens the door to its inflation fight. He said employers are having difficulties filling job openings, while workers are quitting and taking new jobs helping wages rise at the fastest pace in years.

“We know that the best thing we can do to support a strong labor market is to promote a long expansion, and that is only possible in an environment of price stability,” Powell said, restating a line he has used several times now that interprets the inflation fight in terms of preserving the expansion.

Financial markets have reeled since Russia’s invasion of Ukraine, sending energy prices jumping and potentially pushing inflation higher, even as heightened tensions cloud the outlook for global growth. Even so, interest-rate futures markets are fully priced for a quarter point interest-rate increase at the March 15-16 meeting from current levels near zero and several Fed officials speaking since the invasion have said they are still inclined to act.

Powell cautioned, however that the “near-term effects on the U.S. economy of the invasion of Ukraine, the ongoing war, the sanctions, and of events to come, remain highly uncertain.”

“Making appropriate monetary policy in this environment requires a recognition that the economy evolves in unexpected ways,” he said. “We will need to be nimble in responding to incoming data and the evolving outlook.”

“Powell clearly signaled a rate hike for March, but he did not specify the size,” said Stephen Stanley, chief economist at Amherst Pierpont Securities LLC. “Powell also acknowledged that the Fed is likely embarking on a series of rate hikes, noting that removing policy accommodation will entail ‘increases in the target range of the federal funds rate.’”

The Fed chair gave no timing on balance-sheet reduction, a decision that is likely still pending for the Federal Open Market Committee. After rate increases start, trimming assets “will proceed in a predictable manner primarily through adjustments to reinvestment,” he said.

Powell said he continues to expect inflation to decline over the course of the year as supply constraints ease and demand cools off in the wake of waning fiscal support and higher interest rates.

That seems like a reasonable forecast, said Kathy Bostjancic, chief U.S. economist at Oxford Economics, though headline inflation is likely to rise further with increasing commodity prices resulting from the Ukraine war. “Clearly the risks are to the upside here,” she said.

Powell, whose confirmation for a second term has been stalled by Republican opposition to President Joe Biden’s selection of Sarah Bloom Raskin to be vice chair for supervision, faces the challenge of pivoting policy to confront the highest inflation in 40 years, while not tightening so much that the economy stalls.

Critics, including some Republican lawmakers, say the U.S. central bank has been too slow to act.

The Fed’s preferred gauge of price movements rose at a 6.1 per cent annual pace in January, triple the central bank’s 2 per cent target. Demand remains strong with growth forecasts centering around 2.9 per cent this year, according to estimates tallied by Bloomberg, while companies continue to add employees at a robust pace. Meanwhile, some of Powell’s colleagues see an urgent need to raise rates, with Governor Christopher Waller calling for 100 basis points of tightening by midyear.

Fed officials will release fresh quarterly estimates for interest rates and the economy at their upcoming meeting, offering some guidance for how far and fast they expect to tighten policy in the coming months. Some have signaled the Fed may have to act with more force to get price pressures under control.

“This situation calls for rapid withdrawal of policy accommodation in order to preserve the best chance for a long and durable expansion,” St. Louis Fed President James Bullard said in separate remarks Wednesday. “The FOMC may have to move more aggressively going forward if inflation increases or does not moderate as much as expected.”

The Fed chair follows his remarks today with an appearance before the Senate Banking Committee Thursday, where Powell is waiting for a confirmation vote together with Biden’s four other nominees for the central bank.