Federal Reserve Chair Jerome Powell can expect pressure to support the stimulus plan of Democratic lawmakers when they host him this week on Capitol Hill for the first time since regaining control of Congress.

In testimony before the Senate Banking Committee on Tuesday and the House Financial Services panel the following day, Powell will probably play down the risk of inflation despite the size of President Joe Biden’s US$1.9 trillion coronarvirus relief proposal.

The Fed chief could cite the millions of Americans still out of work due to the pandemic, and repeat that the central bank is not thinking about withdrawing monetary policy support anytime soon.

The fiscal package being weighed by Congress would amount to the largest in U.S. history. That’s raised concern among some economists in both Democratic and Republican circles that its size could lead to unwanted price pressures and financial-market excesses.

The Fed chair in recent weeks has been dismissive of both concerns and if he sticks to that line, it could be seen as validating calls from Democrats -- including his predecessor, Treasury Secretary Janet Yellen -- that the risk of going big is outweighed by the perils of not doing enough.

“Powell will come back to just how far away from their goals on the labor market, and that’s why it’s too soon to declare victory and move on,” said Michael Gapen, chief U.S. economist at Barclays in New York.

Democrats will probably press Powell to repeat his warning that the economy needs more aid. Republicans in response could push him to discuss the risks of prolonged policy stimulus. Volatility in the shares of firms including GameStop Corp. have fanned fears of a bubble.

Fed officials have signaled they don’t expect to raise interest rates from near zero until at least through 2023, and will keep buying bonds at a US$120 billion monthly pace until the economy has made “substantial further progress” toward full employment and sustained 2 per cent inflation.

U.S. Treasury yields have been rising steadily since the beginning of the year as the odds of more fiscal stimulus have risen, brightening the outlook for the economic recovery and contributing to investor speculation that such progress could come sooner rather than later.

Speculation the fed may tighten sooner that it’s indicating has also been fueled by criticism of the size of Biden’s plan from some prominent economists -- most notably former Treasury Secretary Lawrence Summers -- who say it could create excessive inflation. Summers, who is a paid contributor to Bloomberg, said in an interview aired Friday on Bloomberg Television that it may force the Fed to begin raising rates as soon as next year.

Powell has argued in recent weeks that now is not the time to be talking about the timeline for scaling back purchases and raising rates.

Central bankers are making a distinction between the likely impact of more fiscal stimulus on employment and inflation. While they see it speeding the recovery toward full employment, they expect inflation to remain subdued after a temporary increase in the months ahead.

That’s a view that is widely shared by Wall Street forecasters.

“We’re trying to communicate to clients that it’s the composition effects that are going to matter. Services inflation is still really soft, and goods inflation is unlikely to offset that” as the year progresses, Gapen, a former Fed economist, said.

“Services inflation is largely a domestic-generated process, and again, with 10 million people unemployed, it’s going to be hard to get those domestic price pressures until you get the labor market running pretty hot,” he said.

There’s less agreement on financial risks, including within the Fed. While top policy makers including Powell have downplayed worries over record-high stock prices, staff economists are increasingly raising such concerns.

Powell, a Republican who was appointed to his position by President Donald Trump in 2018, will close out his term early next year.

Under his leadership, the Fed has overhauled its framework for setting monetary policy, vowing to keep interest rates low until inflation actually begins rising for a sustained period. That marks a shift from past decades, when the central bank often began raising rates in anticipation of inflationary pressures. 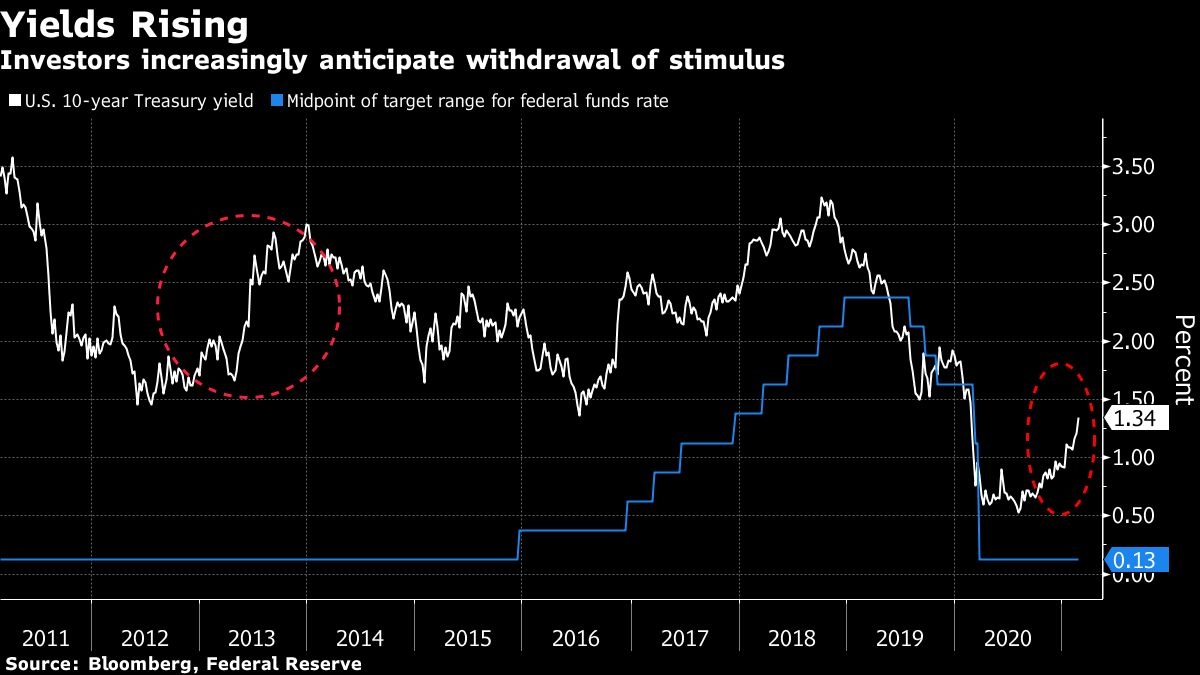