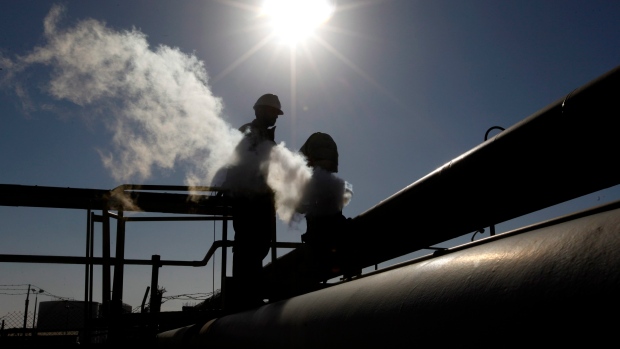 A Libyan oil worker works at a refinery inside the Brega oil complex, in Brega, eastern Libya. , The Canadian Press

DUBAI -- OPEC member Kuwait said on Friday it would be premature to cap Nigerian and Libyan oil production as the two African countries' output needed to stabilize further.

The market is on a recovery track due to rising global demand, Kuwait's OPEC governor Haitham Al-Ghais told Reuters.

In an effort to eradicate a supply glut, the Organization of the Petroleum Exporting Countries is curbing output by 1.2 million barrels per day (bpd) until March 2018, while Russia and other non-OPEC producers are cutting half as much.

But oil prices have fallen more than 15 per cent this year due to still-booming supplies and stubbornly high global stocks, which remain way above OPEC targets despite the cut agreement.

A ministerial committee from OPEC and non-OPEC countries, which is headed by Gulf OPEC member Kuwait, meets in Russia on July 24 to discuss compliance with the cuts, from which Nigeria and Libya are exempt due to years of output-sapping unrest.

"All this talk about putting a production cap on Libya and Nigeria is premature," Al-Ghais said. "Data so far is showing that the real spike in production only happened in June."

The official added that output had increased on average by between 300,000 and 500,000 bpd from the two countries combined since the start of the supply-cutting agreement in January 2017.

He said representatives from Libya and Nigeria had been invited to a technical OPEC/non-OPEC committee meeting on July 22 ahead of the ministerial gathering, to give presentations on production from both countries.

"We have to look at the sustainability and stability of production from those countries," said Al-Ghais, who also heads the technical committee. "We need to wait and see more production data before we can make any decision."

Al-Ghais said that despite production increases from Libya and Nigeria, there were signs of market rebalancing including U.S. government data showing a large drop in stockpiles.

"We feel that the market is on the right way of correcting itself," he said. "Demand will pick up and we expect to see stronger demand in the third quarter."