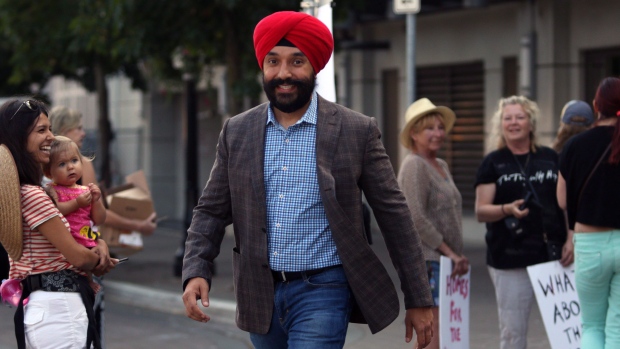 Minister of Innovation Navdeep Singh Bains leaves the Vancouver Island Conference Centre during the final day of meetings at the Liberal cabinet retreat in Nanaimo, B.C., on Thursday, August 23, 2018 , The Canadian Press

OTTAWA -- The federal government is making clear that cuts to wireless rates it expects from mobile-phone service providers must be in addition to price reductions already seen since 2016.

But the latest comments about the Liberals' mobile price reduction plan have only added to confusion around the starting point for the cuts, says the organization that represents Canada's wireless carriers.

Industry Minister Navdeep Bains says the 25 per cent rate reductions he has been mandated to achieve over the next two years will be measured starting after the Oct. 21 election.

The Liberals promised during the fall federal election campaign to cut mobile device rates by an average of 25 per cent, a pledge that was embraced by opposition parties.

But there were no specifics provided on how or when the government intended to force the rate cuts.

In the letter from Prime Minister Justin Trudeau giving him his orders as a minister, Bains was told to use "all available instruments" to make the reduction a reality within two years.

According to a 2019 report from the Canadian Radio-television and Telecommunications Commission, prices in Canada's mobile wireless market had already dropped by an average of 28 per cent from 2016 to 2018.

In an interview with The Canadian Press, Bains said further rate reductions will be measured from around the time he received his mandate letter in December.

"It makes sense that, from our perspective, we made a commitment in the campaign and we are going to honour that," Bains said.

"There has been some confusion regarding how the government intends to measure" its commitment on pricing, the Canadian Wireless Telecommunications Association said in an email responding to the minister's comments.

"We will wait to see what details the government provides in terms of how they intend to move forward."

The CWTA noted there has already been "very positive momentum" in Canada's telecom industry with prices declining amid intense competition.

During the election campaign, the Liberals promised to reduce the cost of wireless services by almost $1,000 per year for a family of four. They based the savings on that family having four devices: two with unlimited talk and text and five gigabytes (GB) of data costing a "current average price" of roughly $75 per month each, and two with 2 GB each of data usage per month, each at a cost of about $55 a month.

Reducing those costs by a mandated 25 per cent would save the family $976.56 annually.

Analysts at Scotiabank and TD Bank concluded in late September that the reduction target could easily be achieved, essentially because the targets were either already within grasp, or had already been reached or surpassed.

Telus, Rogers and Bell -- the Big Three telecom service providers -- no longer offer plans that provide only 2 GB of data. Their unlimited shareable plans, with speed caps at 10 GB, list at $75 per month, or less than that as part of promotional offers.

Smaller carriers such as Virgin Mobile, Fido and Koodo sell 2-GB and 4-GB plans for between $45 and $55 per month.

Canadian cellphone and wireless rates have long been a source of complaints from consumers who see lower prices advertised in other countries, particularly the United States.

The major Canadian carriers have warned that forcing prices for their wireless plans too low could result in reduced investments in the infrastructure needed for faster and more reliable mobile service.

The government has two main tools it can use to encourage competition in the wireless market, and thereby reduce prices, Bains said: the sale of wireless spectrum licences and requiring that the bigger telecom companies lease space on their networks to smaller upstart firms operating mobile virtual networks -- companies called "MVNOs."

The federal government auctioned more than 100 spectrum licences to the country's wireless companies last spring, raking in nearly $3.5 billion in the process. The lion's share was bought by Rogers Communications.

Spectrum is the invisible signal carried on electromagnetic waves that allows wireless service providers to transmit data to cellphones and other connected devices -- the same spectrum, at different frequencies, used to carry radio and TV signals.

The government is planning to auction key 3,500 MHz wireless spectrum for fifth-generation, or 5G, networks early this year.

Mobile 5G wireless technology is up to 100 times faster than the 4G system in current wide use across Canada.

A government panel has been reviewing Canada's broadcasting and telecommunications laws and the rules around mobile virtual network operators. Bains said he hopes the panel's report -- expected within weeks -- will provide Ottawa with guidelines for how the operators can foster greater competition.

It's not just small operators hoping to piggyback on existing wireless networks through wholesale access.

In a submission to the panel last summer, Google called for policy changes that would make it easier to set up a telecommunications service in Canada, mainly for data.

The CRTC is also reviewing Canada's wireless market with in-person hearings set to begin next month in Gatineau, Que.

As part of that review, the CRTC is considering whether to require the country's Big Three telecom providers to lease mobile virtual network operators space on their networks until the startups can buy spectrum and build their own infrastructure.