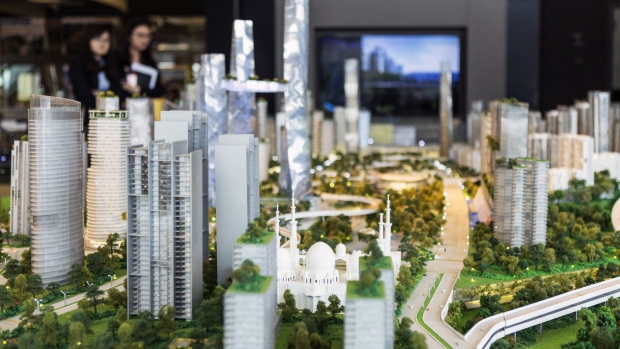 A model of the proposed Bandar Malaysia development, which Iskandar Waterfront Holdings Sdn. and China Railway Engineering Corp. bought 60 percent of in December last year for 7.41 billion ringgit, stands in a showroom in Kuala Lumpur, Malaysia, on Friday, Oct. 07, 2016. The development will host terminals for a planned high-speed rail line connecting Kuala Lumpur to Singapore and has an estimated sales value of 150 billion ringgit. Photographer: Charles Pertwee/Bloomberg , Bloomberg

(Bloomberg) -- Iskandar Waterfront Holdings Sdn. has hired banks to help prepare for an initial public offering in Kuala Lumpur to raise about 5 billion ringgit ($1.2 billion), in what would be the biggest first-time share sale in the Southeast Asian nation since 2012.

The property firm is working with Bank of China Ltd., CIMB Group Holdings Bhd., Citic CLSA and Industrial & Commercial Bank of China Ltd. on the planned IPO, Executive Vice Chairman Lim Kang Hoo said in an interview Tuesday. The developer plans to submit an application to the Malaysian regulator in two months, he said, adding that the potential share sale values IWH at more than 20 billion ringgit, he said.

The company had originally aimed to list on the domestic bourse this year but the plan has been pushed back to the second half of 2021 because of the impact from the coronavirus pandemic, Lim said. IWH may consider a second listing in mainland China or Hong Kong after it goes public in Kuala Lumpur, he said.

At $1.2 billion, IWH’s planned IPO would be the biggest since IHH Healthcare Bhd.’s $1.3 billion sale in 2012. It would also give a boost to the Malaysian market, which has seen the lowest sum raised through first-time share sales in the year to date since 2000, according to data compiled by Bloomberg.

The company also holds a stake in a joint venture working on the 140 billion ringgit Bandar Malaysia development project, which is set to be the hub for a proposed high speed rail line that would connect Kuala Lumpur to Singapore.

Bandar Malaysia was originally conceived under 1Malaysia Development Bhd., or 1MDB. When the troubled fund was swamped by corruption investigations, it tried to sell a major stake in the project to IWH and China Railway Engineering Corp., before canceling the deal amid a dispute over payments in 2017. Malaysia revived the project in 2019, selling IWH-CREC Sdn. a 60% stake.

IWH-CREC paid a 1.24 billion ringgit deposit to the Malaysian government Tuesday, which includes a 500 million ringgit advance, thus completing its 10% settlement for its stake in the property and transport hub, Lim said. It has until February 2022 to pay the remaining 90%, he said.