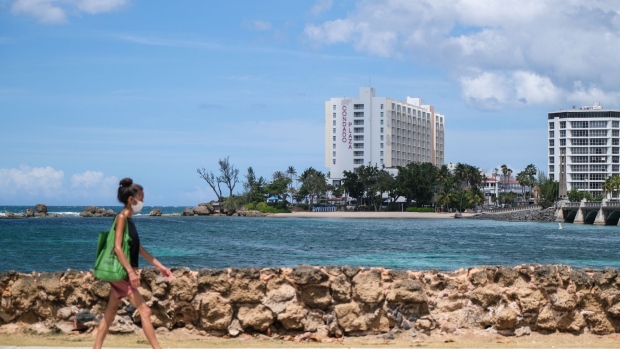 A pedestrian wearing a protective mask passes in front of the Condado Plaza hotel in the Condado area of San Juan, Puerto Rico, on Thursday, May 21, 2020. Since mid-March, the U.S. commonwealth has been requiring visitors to endure one of the strictest medical screenings of any state or territory. Doctors in protective suits take their temperatures, grill them about their travel history and, in some cases, hustle them off for Covid-19 tests. Photographer: Gabriella N. Baez/Bloomberg , Bloomberg

(Bloomberg) -- Puerto Rico and rival bondholder groups reached a tentative deal that would slash the debts owed by the central government, a key step toward resolving the island’s nearly four-year bankruptcy.

The new agreement takes account of the economic hit the pandemic has taken on the U.S. territory since the terms of the previous debt-cutting deal were struck in February 2020.

Under the terms, owners of the island’s $18.8 billion of general-obligation and Public Buildings Authority debt would receive $14.4 billion, $7 billion in cash and the rest through the issuance of new securities, according to a disclosure the island’s federal oversight board made to investors. Investors would also receive a so-called contingent-value instrument that would pay off if sales taxes exceed targets.

That compares to a total $15.6 billion in the previous pact, which provided a smaller cash payment and didn’t include a contingent value instrument, according to the documents.

While the deal cuts the island’s debt more deeply than the previous agreement, it is supported by owners of more than $11.7 billion of debt, including bond insurers, Aurelius Capital Management, BlackRock Financial Management Inc., Davidson Kempner Capital Management and GoldenTree Asset Management.

The accord, if eventually supported by a sufficient number of creditors and approved in court, promises to help Puerto Rico emerge from a bankruptcy that has cast a shadow over the island since May 2017 by cutting the central government’s bond debt by 61%. Already contending with a stagnant economy and shrinking population, the territory had been battered by hurricanes, earthquakes and political turmoil even before the pandemic struck.

“We achieved a fair, sustainable, and consensual agreement that puts Puerto Rico on a path to recovery and is an important tool to lift the weight of bankruptcy from the people and businesses of Puerto Rico,” David Skeel, the chairman of the oversight board, said in a statement.

Puerto Rico’s oversight board said the terms of the pact would allow bondholders to recover between 67.7% to 80.3% of their investment, depending on the class of security, based on one way of valuing the deal. That compares with 73.7% to 87.4% contained in the 2020 agreement, according to the securities filing to bondholders.

The board said in a statement that works out to an average reduction of 27% for general-obligation bondholders and a 21% cut for those who own buildings authority debt.

To exit bankruptcy, Puerto Rico must restructure its bonds backed directly by the central government’s revenue and also fix an unfunded pension system that owes current and future retirees $55 billion.

Governor Pedro Pierluisi acknowleged that the agreement represented a steep reduction in the island’s debts, but said his administration would not join the deal because it includes cuts to public pensions.

“Unfortunately, the FOMB has not yet abandoned the pension cuts included in the February 2020 plan of adjustment,” Pierluisi said in a statement. “Therefore, the government of Puerto Rico communicated to the FOMB and creditors that itwould not be part of the PSA announced today.”

The board must file to the court a proposed debt restructuring plan by March 8. Judge Laura Taylor Swain on last week approved postponing that deadline from an earlier Feb. 10 due date.