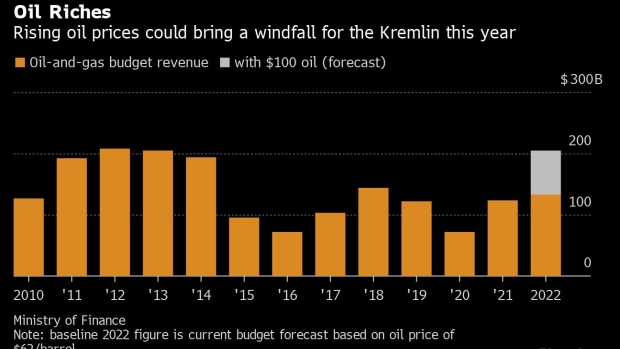 (Bloomberg) -- Russia’s budget could get more than $65 billion in extra revenue this year thanks to the rally in prices for oil, its main export, adding to the Kremlin’s financial strength as it faces threats of possible sanctions from the U.S. and Europe.

Prices would have to stay around current levels of $90 a barrel this year boost revenues that much, according to economists’ estimates. With oil at $100, which some forecasters say may not be the limit, the total would be closer to $73 billion, bringing the dollar value of Russia’s total earnings close to peaks last seen about a decade ago. Bloomberg Economics forecasts the windfall could reach as much as $80 billion at $100 oil.

In ruble terms, the windfall could be even greater, since the currency has weakened against the dollar amid fears of new sanctions over the Ukraine crisis. Russia had been expecting a bumper year for oil-and-gas revenue this year in rubles anyway, with 9.5 trillion budgeted, assuming oil prices at $62. Higher natural gas prices thanks to continuing tensions in Europe, Russia’s main export market, could further add to the windfall.

“Russia’s fiscal position is so super-stable that even with more modest oil prices, it’s hard to compromise it in the current situation,” said Sofya Donets, economist at Renaissance Capital in Moscow.

“This year’s energy windfall looks set to be staggeringly large. That’s swelling Russia’s fiscal reserves at just the right time for the Kremlin, providing a bigger buffer against crisis in the event of sanctions. Geopolitics aside, it also means more flexibility to boost spending and invest in the economy.”

Oil’s turnaround is a dramatic swing from just two years ago, when prices crashed at the start of the Covid pandemic. Prices for Russia’s main export blend in the last few weeks have reached levels last seen in 2014, when the U.S. and its allies first imposed sweeping economic sanctions to punish Moscow for its annexation of Crimea from Ukraine. Now, the West is threatening to impose new restrictions if Russia invades its southern neighbor, something the Kremlin says it doesn’t intend to do.

By law, the bulk of the windfall will go to the National Wellbeing Fund, most of which is held in gold and foreign currency by the central bank as part of its reserves. But some of the money can be used for infrastructure and investment projects to help sustain growth even as sanctions pressure cuts off investment inflows. The government is currently planning to spend about 2.5 trillion rubles from the fund on projects over the next several years.

“Higher oil means first of all more intensive talk about spending the National Wellbeing Fund, it’s a cushion,” said Donets. Even at $85 oil, the fund’s balance would rise 50% this year from $183 billion on Jan. 1, she said.

Since the first waves of western sanctions, Russia has moved to reduce its dependence on revenue from oil and gas. This year’s budget targets 38% of revenue from those sources, down from more than 50% a decade ago. Any windfall from higher prices could raise the share.