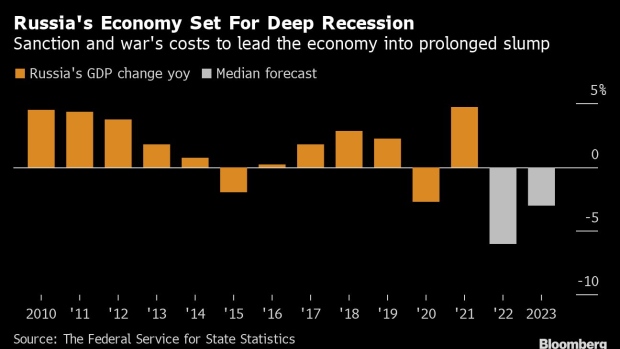 (Bloomberg) -- Vladimir Putin’s decision to call up 300,000 men to fight in his invasion of Ukraine is hitting two of the battered Russian economy’s weak spots.

The order takes about one in a hundred of the country’s active workers from their jobs to send to the front when record-low unemployment - combined with the exodus of Russians fleeing the country to avoid the mobilization - means there are few candidates to replace them. And it’s likely to batter Russians’ already-fragile finances, leaving some draftees’ families short of cash.

“Mobilization delivers a strong negative shock to consumer sentiment,” said Renaissance Capital economist Sofya Donets. “We’ll see a strategy of abandoning unnecessary purchases and a deep drop in demand.” She forecasts the drop will add about 0.5% to the contraction in GDP this year.

Bloomberg Economics also expects the call-up to deepen the drop in GDP and boost inflation this year. “Worse, these ramifications are likely to persist over the next five years,” Russia economist Alexander Isakov said.

The country’s economy has held up better under the sweeping sanctions imposed by the US and its allies over Putin’s invasion of Ukraine than many had predicted. The government still expects a contraction of about 3% this year and 1% next year, with inflation running well above target.

The speed of the moves from the Kremlin in the last week have economists struggling to keep up. Dmitry Polevoy of Locko Invest published a report Tuesday trying to assess what the imposition of martial law -- something the Kremlin has said isn’t currently under discussion -- might mean for the economy and financial markets.

Besides raising the risk of a deeper downturn and a bigger hit to public finances, he warned of possible state takeovers of companies and the introduction of multiple exchange rates.

Already, companies are scrambling to prevent their employees from being drafted, given the tight labor market. Government regulations allow some critical workers exemptions but the mechanism for getting them isn’t fully operative yet since Putin hastily announced the call-up on Sept. 21. Russia’s main business associate appealed Tuesday for the government to broaden the list, which doesn’t cover many big industrial sectors.

Consultants have rushed out efforts to advise employers on how to protect their personnel. Still, some firms are advising staff to work from home on days when draft notices are expected to be distributed at the office.

“The authorities have started to realize the seriousness of the situation,” said Natalya Zubarevich, a specialist on the economy of Russian regions at Moscow State University. Most of the draftees are likely to come from rural areas, hitting the farm and construction sectors, she said.

High-tech businesses, which had been promised their staff wouldn’t be summoned for military service, have found many were caught up in the current wave. Some companies have chartered private jets to evacuate affected staff, Kommersant newspaper reported.

They’ve joined a flood of tens of thousands of Russians trying to leave the country, causing miles-long lines at land borders and sky-high prices on airline tickets. Amid growing fears the Kremlin will limit the outflow, authorities have said only that no decisions have yet been made. Already, potential draftees who received mobilization notices have been turned back, according to lawyers working with them.

The blow to consumers comes as the government is already planning to add to the squeeze on their finances. The budget calls for a big jump in income-tax collections over the next two years, part of a broader drive to boost revenue to help pay for the cost of the war. State-regulated utility prices are also going up.

To be sure, the government is promising to boost benefits for the families of those called up to help them tide over the period of lost income. And Tatiana Orlova at Oxford Economics expects higher military spending to “stimulate the economy this year and next.”

The initial impact on the data could be mixed, according to Renaissance’s Donets. “Some of the mobilized will count as employed and their salaries will actually appear higher, while government spending will stay elevated and some ‘mobilized’ sectors of industry will show growth,” she said.

Longer-term, mobilization and the rising toll of dead and wounded from the war will reduce the already-small cohort of Russians of prime working age, according to Zubarevich.

“The main thing isn’t the loss of workers, it’s the brain drain,” she warned. “The people who are leaving as a rule are wealthier, educated. You can’t flee with an empty wallet.”