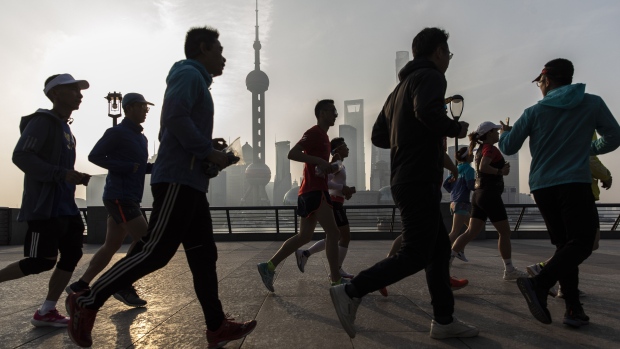 Joggers run along the Bund as the Lujiazui Financial District stands in the background in Shanghai, China, on Saturday, April 10, 2021. China's population is aging more quickly than most of the worlds developed economies due to decades of family planning aimed at halting population growth. Photographer: Qilai Shen/Bloomberg , Bloomberg

(Bloomberg) -- Mainland China is third behind the Bahamas and Cambodia in a ranking of the maturity of central banks’ retail digital currency projects, according to a report from PwC.

More than 60 central banks are now exploring digital currencies, with retail projects more active in emerging economies given the importance of financial inclusion, while interbank or wholesale applications tend to be more predominant in advanced economies, the report said.

The Bahamas and Cambodia take top marks in retail because their projects are already live, while China is still in the test phase. Only 23% of retail projects have reached implementation stage, while nearly 70% of wholesale projects are running pilot programs, according to the report.

With China in the testing phase on its digital yuan, other countries have accelerated their efforts. Jurisdictions like Sweden and the European Union are starting to make some headway. The Federal Reserve, though, has signaled it’s in little rush to get a digital dollar off the ground.

China’s efforts to create a digital yuan are aimed at domestic use and its goal for internationalizing its currency is not to replace the dollar, a senior official from its central bank said Sunday.

As for interbank or wholesale projects, Thailand and Hong Kong SAR tied for the top ranking, according to the PwC report. They’re followed by Singapore, Canada and the U.K.

The report also said more than 88% of CBDC projects at pilot or production phase use blockchain as the underlying technology. While it isn’t always necessary for such projects, it helps offer secure transfer of ownership, transparent audit trails and increasing interoperability with other digital assets, the report said.

“The general public will be one of the biggest beneficiaries of CBDCs as it will give them access for the first time to a digital form of central bank money,” said Henri Arslanian, global crypto leader at PwC. “And that is a big milestone in the evolution of money.”