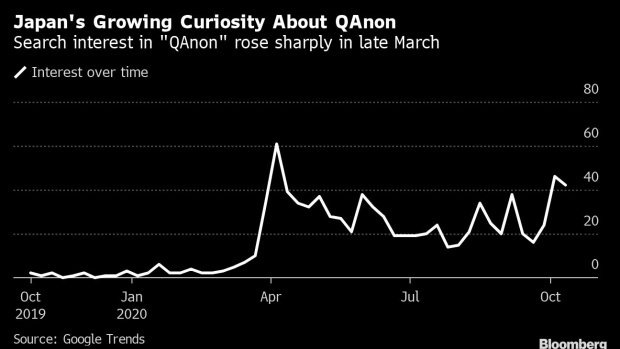 The shadows of commuters are cast on the ground in Tokyo, Japan, on Thursday, Nov. 19, 2020. Tokyo raised its Covid-19 alert to the highest of four levels, as daily infections in the Japanese capital increased by more than 500 for the first time amid a resurgence of the pathogen across the country. , Bloomberg

(Bloomberg) -- QAnon’s days as a solely U.S. phenomenon are over.

The conspiracy theory’s foothold in Japan -- home to one of its most active networks outside the U.S. -- demonstrates how the movement can be made palatable in a range of countries as it gains popularity from Europe to Brazil.

Research by social media analytics firm Graphika Inc. shows the Japan-based QAnon community is among the most developed international chapters, with distinct terminology, influencers, and behaviors -- such as idolizing Michael Flynn, a former U.S. national security adviser in the Trump administration.

“What we’re seeing now is an adaptation of U.S. QAnon taking root in European countries, whereas in Japan and Brazil, it does seem to be slightly more independent and self-sustaining as an ideology,” said Melanie Smith, head of analysis at Graphika. She attributes the increasing prominence of QAnon to the U.S. election and the pandemic.

This internationalization presents an uphill battle for social media companies already facing increased pressure from governments to combat disinformation on their platforms in English, let alone myriad other languages. President Donald Trump’s refusal to concede the election to Joe Biden has prompted many of his supporters to say without proof that the election was stolen. Lawsuits filed by the Trump campaign and its GOP allies have failed in Pennsylvania, Michigan, Georgia, Nevada and Arizona as the legal team has failed to produce any evidence of widespread fraud that would change the results. However Trump supporters’ accusations continue, potentially giving fresh life to conspiracy theories such as QAnon after the president leaves office.

Like its U.S. counterpart, Japan’s QAnon community centers on an unsubstantiated belief that Trump is battling to save the world from a cabal of pedophiles, including Democrats and “deep state” agents. While it’s hard to estimate the size of QAnon’s following in any country given its lack of official membership and overlap with other conspiracy communities, data from Google Trends show a sharp rise in Japanese interest in QAnon from late March to early April before tailing off somewhat.

Japan’s community is perhaps most notable for its reverence of Flynn. He only served in the Trump administration for 24 days and resigned after acknowledging he had misled Vice President Mike Pence over communications with the Russian ambassador; he later pleaded guilty to lying to federal agents about their conversation and was pardoned by Trump last week. The Japanese group even styles itself QArmyJapanFlynn after the former general who popularized “digital soldiers,” a term many Q supporters use to describe themselves.

Flynn follows several Japanese QAnon accounts, including @okabaeri9111 -- the Twitter linchpin of the community. The handle run by Eri Okabayashi has more than 80,000 followers, and says it is both the founder of QArmyJapanFlynn and sole official translator of Q content into Japanese. The most popular video translation of Q content on an associated Youtube account had more than 200,000 views before it was removed for violating the site’s content policy. By comparison, two Brazilian accounts Graphika described as “highly followed” in its August report had 54,400 followers and 16,800 followers at that time. The U.K. Facebook groups highlighted in the report had 10,000 to 11,000 members.

In an email interview, Okabayashi described herself as a university graduate from “a medium-sized city in Japan” who has never lived abroad but taught herself English by watching U.S. television shows. A few months after starting a Twitter account in January 2019, she was invited to join “a group of well-known QAnons” and became a follower.

“Flynn was in the group” but stopped participating in about June last year, she said, without providing evidence. Robert Kelner, a lawyer for Flynn, didn’t respond to a request for comment.

Okabayashi said her interest in QAnon stemmed in part from deep-seated doubts about Japan’s approach to women and motherhood. Economists have long warned that Japan’s low birth rate and shrinking population could spur a demographic crisis, as the labor force diminishes in a country with one of the world’s longest life expectancies.

“I was convinced that a country that does not allow women in their twenties of childbearing age to focus on childbirth and child rearing will eventually die,” she said. Japanese female workforce participation has historically lagged other developed nations, but that is changing: a record 71% were employed in 2019, in part as a result of one of the world’s most generous parental leave laws.

Okabayashi also expressed belief in domestic conspiracy theories, such as the baseless claim that Japan’s political and business elite -- including the prime minister -- are foreigners intent on exploiting and ultimately exterminating the Japanese race. She also said in a Twitter post that she is friends with QAppAnon, the pseudonym of former Citigroup Inc. employee Jason Gelinas, and has created a Japanese version of the popular QAnon website QMap.pub that he ran before it was shut down in September. Gelinas declined to comment.

Other Japanese QAnon followers have also incorporated domestic issues. Some accounts have suggested without evidence that Prime Minister Yoshihide Suga’s early high approval ratings were fabricated by the media. The list of influential figures accused of belonging to the cabal includes Emperor Emeritus Akihito, and conspiracies have also circulated about the atomic bombings during World War II and the 2011 nuclear disaster that followed a devastating earthquake and tsunami.

While some Japanese QAnon accounts and posts are no longer available, major influencers like @okabaeri9111 continue to share prolifically. A spokesman for Japan’s Public Security Intelligence Agency declined to comment.

No Japanese politician is seen by QAnon adherents as a hero -- none is aligned closely enough with the U.S. president’s ideology. “Trump is pretty much the only political figure,” said Smith from Graphika, who noted that Brazil’s President Jair Bolsonaro was an exception. “The major challenge particularly for social media platforms is going to be being able to distinguish what is a QAnon account from what is a generally Trump account, from an anti-establishment account.”

Both Twitter Inc. and Facebook Inc. are rolling out responses designed to limit the amplification of problematic posts, ranging from content warnings to removing certain posts. Facebook highlighted a public statement on its QAnon policy that outlines a full list of measures, saying “QAnon messaging changes very quickly and we see networks of supporters build an audience with one message and then quickly pivot to another.”

A spokesperson for Twitter -- the more dominant platform in Japan, where it has more users than any other country outside the U.S. -- said: “We have strong and dedicated teams of specialists who provide 24/7 global coverage in multiple different languages, and we are building more capacity to address increasingly complex issues.”

Besides Japan, QAnon in Brazil has also developed a highly independent ecosystem, according to Graphika. European communities, by contrast, tend to more closely mirror U.S. QAnon: German followers, for instance, often use English hashtags while applying the movement’s ideas to their own governments.

The spread of QAnon globally could have real-world consequences such as decreased uptake of Covid-19 vaccines as more and more people see public health advice as part of “some kind of larger sinister plot,” said Chloe Colliver, head of digital policy and strategy at the London-based Institute for Strategic Dialogue.

“Broadly, the spread of QAnon and conspiracies run the risk of diminishing trust in national and international institutions in any context in which it activates,” she said.