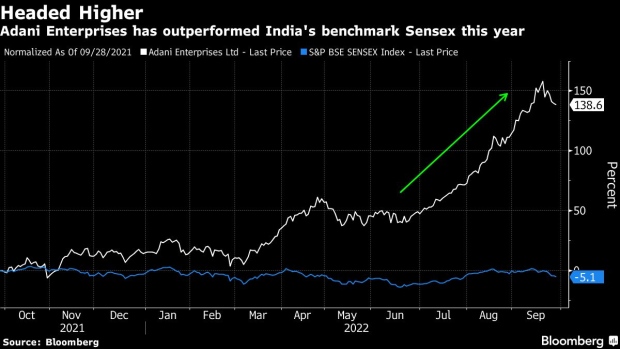 (Bloomberg) -- A quant fund is betting big on billionaire Gautam Adani’s flagship company, brushing aside concerns of leverage in the market, and burnishing its own performance in the process.

Quant Quantamental Fund, with assets of about 921 million rupees ($11.3 million), has given a return of more than 12% this year, thanks to its biggest pick Adani Enterprises Ltd., and beating 99% of peers, according to Bloomberg data.

“We felt they had great operating leverage in most of the businesses they built,” Sandeep Tandon, the founder and chief investment officer at quant Group said in an interview last week. “So it’s not just about looking at the leverage aspect. The market is not looking at the potential cashflows.”

The surge in Adani Group shares propelled Gautam Adani to become the world’s third-richest person even as some investors balked at the debt-fueled expansion of his ports-to-power conglomerate, and lack of wider coverage by research analysts. Adani Enterprises is set to join India’s NSE Nifty 50 Index on Friday.

Shares of Adani Enterprises climbed more than 100% this year, compared with a drop of about 3% in the benchmark S&P BSE Sensex Index.

“People are very complacent in life, which is why sometimes jewels or multi-baggers are not spotted by analysts,” said Tandon, whose group manages assets valued at more than $1 billion. “Analyst reports are generated at the peak of the cycle usually,” and they “as a community are late.”

The Mumbai-based asset manager’s ownership of Adani- controlled stocks is something rare as the companies have little exposure from top mutual funds despite their extraordinary surge.

“People like to be part of stocks perceived as safe and analysts as a community don’t want to put in serious efforts in spotting opportunities,” said Tandon, who has nearly three decades of experience in capital markets in India.