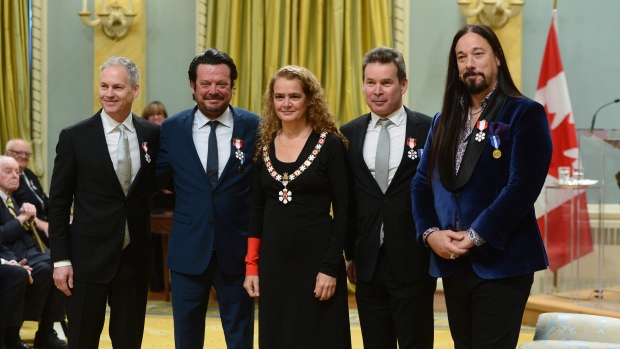 Julie Payette, Governor General of Canada, presents the insignia of the Order of Canada to members of the Tragically Hip Johnny Fay, left to right, Paul Langlois, Gord Sinclair and Rob Baker, at Rideau Hall in Ottawa on Friday Nov. 17, 2017. , The Canadian Press

Hexo Corp.’s (HEXO.TO) $263 million deal for Newstrike Brands Ltd. (HIP.V) came together over dinner with The Tragically Hip and marks the first time Royal Bank of Canada advised on a cannabis transaction.

The Canadian rock band owns more than 5 per cent of Newstrike and has been a key adviser to the Toronto-based pot firm, according to Hexo Chief Executive Officer Sebastien St-Louis.

“They’re fully supportive of the deal, and without their support we would not have done the deal,” St-Louis said in a phone interview.

The purchase price “represents a very modest 4 per cent premium based on each stock’s closing price yesterday,” CIBC analyst John Zamparo wrote in a note Wednesday, adding that the industry is beginning to see a wave of consolidation. “In our view, small- and medium-sized licensed producers face material risk in the long term when it comes to competing with industry heavyweights with much larger marketing budgets.”

The deal will give the combined company 150,000 kilograms (330,693 pounds) of annual production capacity, 1.8 million square feet of cultivation space across four facilities, and distribution agreements with eight provinces. Hexo said it now expects net revenue in excess of $400 million for fiscal 2020, well above the average analyst estimate of $233.4 million, and foresees annual synergies of $10 million.

RBC Capital Markets acted as the financial adviser to Newstrike, the first time the bank has advised on a cannabis deal, according to a bank spokesman. RBC Capital Markets head Doug McGregor said in December that it would begin advising on cannabis stock sales and takeovers.

RBC (RY.TO) was willing to work on the deal because of Hexo’s reputation, including its joint venture with Molson Coors Brewing Co., St-Louis said.

“I think Hexo has been doing things the right way for a long time, we certainly have now a reputation for execution and also good governance that allows partners of RBC’s status and of Molson’s status and other Fortune 500s to come to the table,” he said.

Newstrike, which has the stock symbol HIP, was set to be acquired by CanniMed Therapeutics Inc. in an all-stock deal in 2017. That deal fell apart when CanniMed was acquired by Aurora Cannabis Inc. after a hostile bid turned friendly.