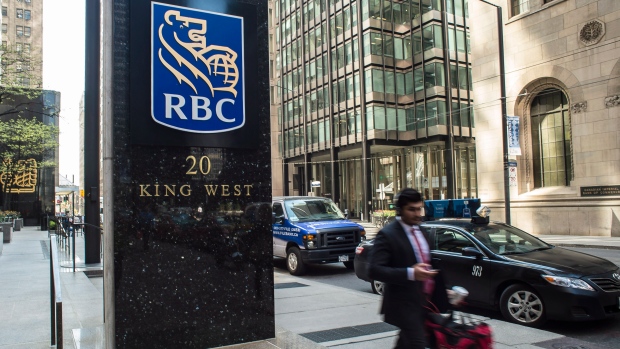 The logo for the Royal Bank of Canada is seen on King Street West in Toronto, on Tuesday, May 24, 2016. , THE CANADIAN PRESS/Eduardo Lima

Like other Canadian lenders, RBC had seen a rise in delinquent loans to oil and gas companies due to declining energy prices. Crude fell to a 13-year low of US$25 a barrel in January.

However, oil prices recovered by about 30 per cent during the latest quarter, providing relief to energy companies that had been struggling to repay debt.

RBC said its provision for credit losses had fallen 12 basis points to 0.24 per cent of its total loans during the quarter, with most of the decline in the oil and gas sector.

"RBC's results were solid, with the only weakness coming from its insurance operations, and the beat was largely generated by much better-than-anticipated provisions for credit losses," said Barclays analyst John Aiken.

John Goldsmith, deputy head of equities with Montrusco Bolton, told BNN that the answer to whether banks have turned the corner on oil and gas loan losses will become clearer when National Bank and Scotiabank report results.

"Those are the two banks that proportionately have larger amounts of energy loans as a percentage of their total book. If their results come in anywhere close to the great numbers that Royal has posted, then I think most people will be looking at this energy blip as a rearview mirror event," Goldsmith said.

RBC also benefited from a strong performance from its wealth management and capital markets businesses, helping it exceed analysts' forecasts.

Earnings before one-off items were  $1.72 per share, compared with $1.66 a year earlier. Analysts on average expected $1.70, according to Thomson Reuters I/B/E/S.

Profit from the wealth management division increased by 36 per cent to $388 million, benefiting from the contribution of Los Angeles-based City National, which RBC acquired for $5 billion last year.

City National, known as Los Angeles' "bank to the stars" because of its ties to the movie industry and celebrities, gives RBC an opportunity to access high net-worth clients in the United States.

Earnings from RBC's insurance business fell 25 per cent to $129 million due to weakness in annuity contracts in Britain and the impact of the Fort McMurray wildfires in Alberta.

RBC increased its dividend by 2.5 per cent to 83 Canadian cents per share.

Lyle Stein, managing director and senior portfolio manager with Vestcap Investment Management, said in an interview with BNN that RBC and BMO’s results show strength in the sector.

“In this business, perception is almost as important as reality. And just the sense that they’re taking their [loan loss provision] numbers down at a time when doubts continue to creep in – particularly with the headlines in Alberta – you just kind of have to look askance at maybe the quality of that kind of earnings beat,” Stein said.

“We have the best managed banks in the world, and we’re seeing that. We have thrown the kitchen sink at them; they’ve come through lightly.”

Toronto-Dominion Bank and the Canadian Imperial Bank of Commerce are due to report on Thursday.